Here’s what you need to know:

The World Health Organization is expected to release new guidelines on Wednesday encouraging the use of steroid drugs in critically ill patients.

The new studies include an analysis that pooled data from seven randomized clinical trials evaluating three steroids in over 1,700 patients. The study concluded that each of the three drugs reduced the risk of death.

That paper and three related studies were published in the journal JAMA, along with an editorial describing the research as an “important step forward in the treatment of patients with Covid-19.”

Corticosteroids should now be the first-line treatment for critically ill patients, the authors added. The only other drug shown to be effective in seriously ill patients, and only modestly at that, is remdesivir.

Steroids like dexamethasone, hydrocortisone and methylprednisolone are often used by doctors to tamp down the body’s immune system, alleviating inflammation, swelling and pain. Many Covid-19 patients die not of the virus, but of the body’s overreaction to the infection.

The analysis of pooled data found that steroids were linked with a one-third reduction in deaths among Covid-19 patients. Dexamethasone produced the strongest results: a 36 percent drop in deaths in 1,282 patients treated in three separate trials.

In June, researchers at Oxford University discovered that dexamethasone seemed to improve survival rates in severely ill patients. Researchers had hoped that other inexpensive steroids might help these patients.

Taken together, the new studies will bolster confidence in the use of steroids and address any lingering hesitancy on the part of some physicians, said Dr. Todd Rice, an associate professor of medicine and critical care physician at Vanderbilt University School of Medicine.

“This shows us steroids are clearly beneficial in this population and should clearly be given, unless you absolutely can’t for some reason, which needs to be a pretty rare occasion,” he said.

Where cases are
highest
per capita 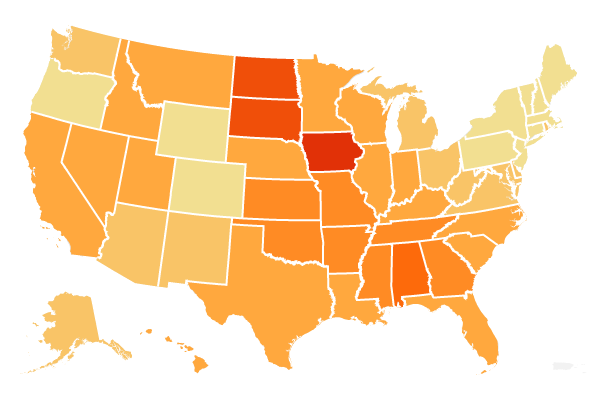 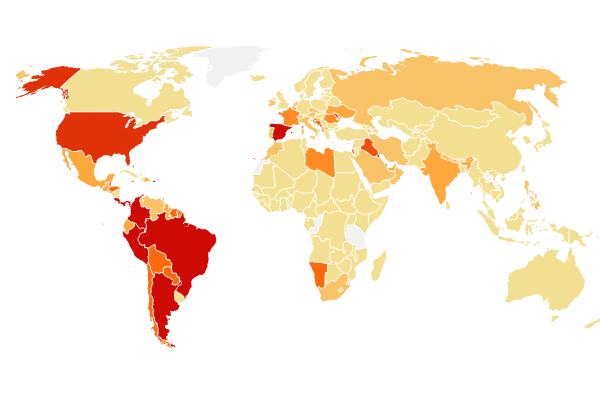 Dr. Scott W. Atlas has argued that the science of mask wearing is uncertain, that children cannot pass on the coronavirus and that the role of the government is not to stamp out the virus but to protect its most vulnerable citizens as Covid-19 takes its course.

Ideas like these, both ideologically freighted and scientifically disputed, have propelled Dr. Atlas, a radiologist and senior fellow at Stanford University’s conservative Hoover Institution, into President Trump’s White House.

Mr. Trump has embraced Dr. Atlas even as he upsets the balance of power within the White House coronavirus task force with ideas that top government doctors and scientists find misguided — even dangerous — according to people familiar with the task force’s deliberations.

“I think Trump clearly does not like the advice he was receiving from the people who are the experts — Fauci, Birx, etc. — so he has slowly shifted from their advice to somebody who tells him what he wants to hear,” said Dr. Carlos del Rio, an infectious disease expert at Emory University. He was referring to Dr. Anthony S. Fauci, the country’s leading infectious disease scientist, and Dr. Deborah L. Birx, the White House coronavirus response coordinator.

Dr. Atlas is neither an epidemiologist nor an infectious disease expert, but his frequent appearances on Fox News and his ideological surety caught the president’s eye.

So when Mr. Trump resumed his coronavirus news conferences in July and August, it was Dr. Atlas’s ideas that spilled from the president’s mouth.

“He has many great ideas,” Mr. Trump told reporters at a White House briefing last month with Dr. Atlas seated feet away. “And he thinks what we’ve done is really good, and now we’ll take it to a new level.”

The core of his appeal in the West Wing rests in his libertarian-style approach to disease management akin to one used to disastrous effect in Sweden. The argument: Most people infected by the coronavirus will not get seriously ill, and at some point, enough people will have antibodies from Covid-19 to deprive the virus of carriers — “herd immunity.” His embrace of this thinking has alienated his colleagues.

“Trying to get to herd immunity other than with a vaccine isn’t a strategy. It’s a catastrophe,” said Dr. Tom Frieden, the former C.D.C. director.

Joseph R. Biden Jr., pressing his argument that President Trump is failing the country with his handling of the coronavirus, plans on Wednesday to make the case that Mr. Trump is hurting the nation’s parents, teachers and schoolchildren with his push for schools to reopen.

Mr. Biden and his wife, Jill Biden, a community college professor, are scheduled to receive a briefing in Wilmington, Del., from a group of experts, including Sylvia Mathews Burwell, who served as secretary of health and human services for President Obama and is now the president of American University, and Linda Darling-Hammond, the president of the California State Board of Education.

Mr. Biden will then give a speech on what his campaign described as Mr. Trump’s failures on the pandemic as well as Mr. Biden’s plan to reopen schools safely.

Symone Sanders, a senior adviser for the Biden campaign, said Mr. Trump was “barreling forward trying to reopen schools because he thinks it will help his own re-election.”

“We believe this is a key contrast for voters,” Ms. Sanders said. “President Trump, who continues to ignore the science and has no plan to get the virus under control, and Joe Biden, who is working with the experts and putting together an effective plan to beat the virus and reopen schools safely.”

Mr. Trump has demanded that schools reopen this fall and threatened to cut federal funding for school districts that defied his wishes. But his effort to pressure schools did not have the effect he desired, and many districts decided to begin the school year with remote instruction.

A superspreader event on a bus focuses scientists on the likelihood of airborne transmission.

In late January, as the new coronavirus was beginning to spread from China’s Hubei Province, a group of lay Buddhists traveled by bus to a temple ceremony in the city of Ningbo — hundreds of miles from Wuhan, center of the epidemic.

A passenger on one of the buses had recently dined with friends from Hubei. She apparently did not know she carried the coronavirus. Within days, 24 fellow passengers on her bus were also found to be infected.

It did not matter how far a passenger sat from the infected individual on the bus, according to a study published in JAMA Internal Medicine on Tuesday. Even passengers in the very last row, seven behind the infected woman, caught the virus.

The incident adds to a large body of evidence indicating that the coronavirus can be transmitted by tiny particles that linger in the air, and not just through large respiratory droplets that fall quickly to the ground.

The new study “adds strong epidemiological evidence that the virus is transmitted through the air, because if it were not, we would only see cases close to the index patient — but we see it spread throughout the bus,” said Linsey Marr, a professor of civil and environmental engineering at Virginia Tech and a leading expert on airborne viruses.

The potential for airborne transmission in close confined spaces raises concern about the winter months, when people will be spending more time indoors, Dr. Marr said. Her advice: “Avoid crowded indoor spaces where people are not wearing masks and the ventilation is poor.”

Pope Francis had his first public audience since March.

In his first public general audience since the pandemic hit, Pope Francis met a few hundred faithful on Wednesday in an imposing courtyard inside the Vatican.

Many from the cheerful crowd stood up from their socially distanced seats as Francis got out of his car, waving and filming him on their cellphones. Some talked with him from behind masks as he walked by the barriers with a large smile.

As he began speaking, Francis said that it was “beautiful” to encounter people “face to face and not screen to screen,” referring to the weekly virtual audiences from the papal library that he has been holding since March.

“The current pandemic has highlighted our interdependence,” Francis said, calling for solidarity. “We are all linked to each other, for better or for worse.”

Francis, whose papacy has been marked partly by concern for the earth, has often also urged the faithful to use the current situation to make significant changes in their lives and rediscover simpler and sustainable lifestyles. On Tuesday, he called for an examination of our energy usage, consumption, transportation and diet, and said the earth could recover “if we allow it to rest.”

He brought attention to the most vulnerable countries affected by the pandemic, which now need “regeneration packages,” and he announced a day of prayer and fasting for Lebanon, which suffered an explosion on Aug. 4 that leveled parts of the capital, killed more than 100 people and injured thousands more.

Australia falls into its first recession in almost 30 years.

After nearly three decades of economic growth, Australia officially fell into recession after its economy shrank 7 percent in the second quarter, the government said on Wednesday.

The drop in quarterly G.D.P. is the largest since record-keeping began in 1959, Michael Smedes, head of national accounts at the Australian Bureau of Statistics, said in a statement.

Restrictions that were imposed in March during the virus’s first surge greatly reduced domestic spending on transportation, hotels and restaurants, while border bans hit the tourism and education industries.

Australia’s second-most populous state, Victoria, remains under lockdown as it fights a surge that was driven by returning travelers. Officials on Wednesday extended Victoria’s state of emergency for six months, a designation that gives them broad powers to enact virus-related restrictions as needed.

In the end, more than $150 billion in stimulus packages could not ward off a recession.

“Today’s devastating numbers confirm what every Australian knows: that Covid-19 has wrecked havoc on our economy and our lives like nothing we have ever experienced before,” Josh Frydenberg, the country’s treasurer, said on Wednesday.

The new data marked a sobering end to what had once seemed an endless boom driven by immigration, rising trade with Asia and careful monetary policy. More than a million Australians were unemployed in July, and the unemployment rate of 7.5 percent was the worst in 22 years.

Australia has recorded 663 coronavirus deaths and more than 25,000 cases, according to a New York Times database.

An overcrowded migrant camp on a Greek island has its first recorded case.

Greece reported the first case of the coronavirus in the Moria camp for migrants on the Aegean island of Lesbos. The migration ministry said the facility would be locked down for two weeks as health inspectors tested other residents. Living conditions at the camp have been decried by human rights groups as it hosts nearly 12,000 people, four times its maximum capacity of 3,000. The patient is a 40-year-old man from Somalia who left after securing refugee status but “returned illegally to Moria and had been living in a tent outside the camp’s perimeter,” the ministry said.

In other news around the world: