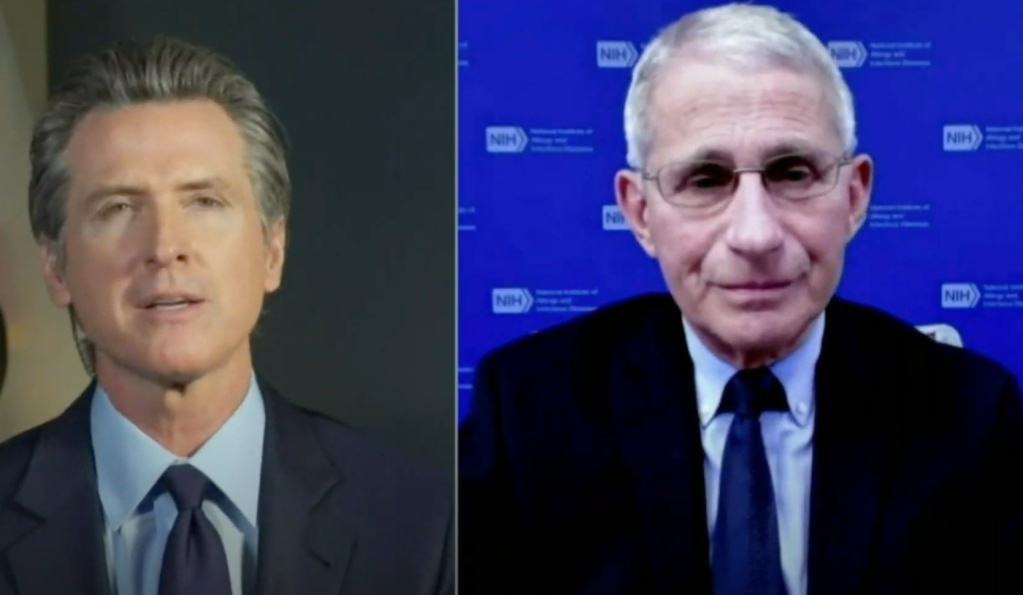 A mutated and more contagious strain of coronavirus that stirred deep concern when it emerged in the United Kingdom has arrived in California, Gov. Gavin Newsom announced Wednesday.

San Diego County officials said tests showed a 30-year-old resident contracted the strain in California’s first confirmed case of the variant, one day after the sequence was discovered on American soil for the first time in Colorado. The Southern California man had not traveled recently, officials said — a sign that despite efforts to contain the mutation in Europe, it may already be spreading locally.

Gov. Gavin Newsom announced the news during a virtual meeting with Dr. Anthony Fauci, Director of the National Institute of Allergy and Infectious Diseases.

There are no signs that the mutant strain causes more severe cases of the illness, Fauci and other contagious disease experts say, and early indications are that it can be combatted with the emerging array of vaccines.

But a more transmissible strain could lead to more infections and deaths as the virus reaches those who are most vulnerable to it. And a surge in COVID-19 patients could worsen the strain on an already taxed medical system, making it more likely that people die from the virus if overwhelmed hospitals can’t provide the care patients need.

The precautions people should take to prevent the spread of the latest strain are the same ones officials have recommended for months in the fight against coronavirus — wearing a face covering and avoiding contact with people from outside your household.

“If we continue to do those things — no matter how transmissible this virus is — it’s going to lose,” said John Swartzberg, clinical professor emeritus of infectious diseases and vaccinology at Berkeley Public Health. “Don’t change a thing, just do what you should be doing all along.”

Fauci said mutations and new strains of the virus are to be expected during a pandemic.

“I’m not surprised that you have a case and likely more cases in California. We likely will be seeing reports from other states,” Fauci said. “I don’t think Californians should feel like this is something odd.”

The coronavirus is an RNA virus, and such viruses “make a living out of mutating,” Fauci said. Most mutations don’t change how the virus acts, but “every once in a while, you get a mutation that does impact the function of the virus.”

“It appears,” Fauci said, “from what we learned from the UK and what we’ll learn here that this mutation does, in fact, make the virus better at transmitting from one person to another.”

Researchers are not yet sure precisely why that is, Swartzberg said. One prime suspect is the “spike” proteins on the virus, which may have mutated to more easily bind to the cells of a potential host. The mutation may also lead infected people to shed more of the virus.

The bottom line, Swartzberg said, is “that (infected) person is more likely to spread it on to another person.”

Fauci said that people who were already infected with coronavirus appear to also have immunity to this strain. Scientists will evaluate the effectiveness of the coronavirus vaccine on the new strain, Fauci said, but it is unlikely a single mutation would impact a vaccine’s effectiveness.

The new strain has not evaded detection in diagnostic tests. On a national level, though, the U.S. has not built out a robust operation to sequence viruses and check for genetic mutations. According to a Washington Post analysis, 42 other counties had sequenced more infections than the U.S., despite the country’s overwhelming number of cases.