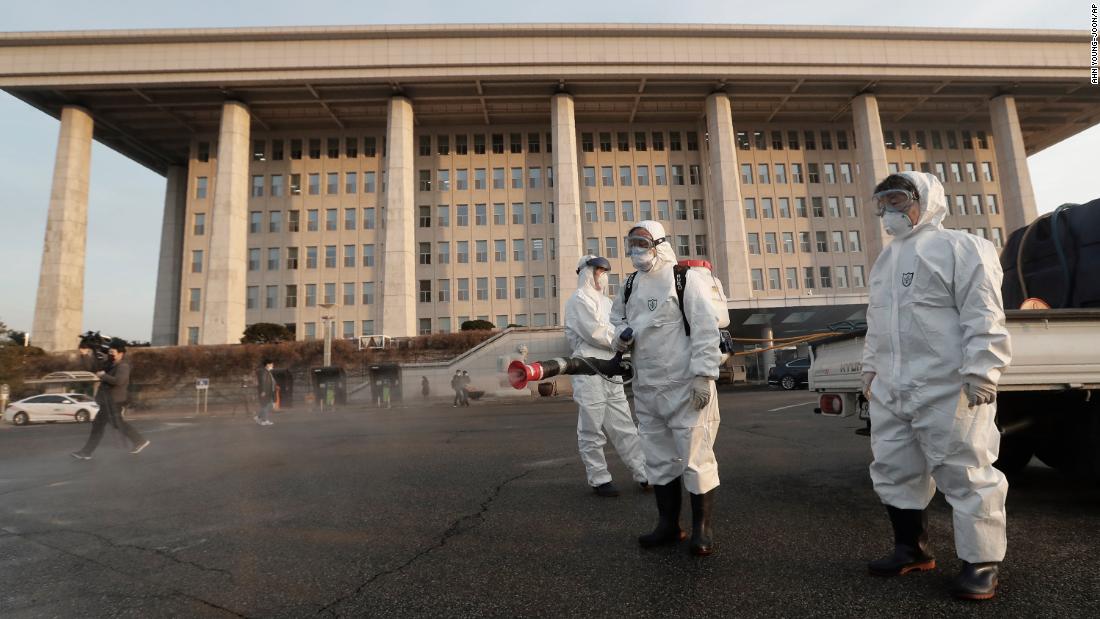 A World Health Organization team landed in Italy late Monday to “support Italian authorities in understanding the situation,” the WHO said. The team’s focus will be on “limiting further human-to-human transmission” after a rapid rise in cases. At least 272 people have been infected with the virus, and seven people have died in the Southern European nation.
In South Korea, more than 970 cases have been confirmed, up from 31 a week ago. At least 10 people have died, and the virus has spread throughout the country, though the worst outbreak remains in the southern city of Daegu.
Chinese authorities announced the postponement of the National People’s Congress (NPC), the country’s rubber-stamp parliament, an unprecedented move in recent times. It comes after President Xi Jinping warned Sunday that that novel coronavirus is the worst public health crisis facing the country since its founding.
At the end of Monday, China’s National Health Commission’s had recorded 77,658 cases in the mainland, and 2,663 deaths. The novel coronavirus has now infected at least 80,067 people worldwide and killed at least 2,700.

Even as the outbreak appeared to be stabilizing in parts of China, with six provinces on Monday lowering their response level, the number of cases worldwide has continued to grow.
In South Korea, all flights have been suspended to Daegu, the southern city where the initial outbreak occurred. Several countries and territories have announced restrictions on travel from South Korea, or new warnings for citizens traveling to the country.
The Daegu outbreak had been centered around the Shincheonji religious group, but the virus appears to have spread now beyond practitioners.
Several hundred members of the group have tested positive for the virus, and more than 9,000 practitioners have been put into self-isolation while they are tested by health authorities. The infection is believed to have transmitted rapidly because of the mass worship sessions the group holds, which puts them in close contact with one another for long periods of time.
Shincheonji has said they are the “biggest victims” of the outbreak, and warned people against “groundless attacks” against them because of the outbreak. They have said they are cooperating with the authorities amid accusations of secret member rolls making it difficult to track potential cases through the country.
Speaking late Monday, US Secretary of Defense Mark Esper said military commanders in Korea “are looking at scaling back the command post training due to concerns about the coronavirus.”
Esper said he is confident the US and South Korea will “remain fully ready to deal with any threats that we might face together.”
Hundreds of cases of the virus have been confirmed across the country, including among the military. Soldiers often live in close confines and there are fears of a self-sustaining outbreak among forces based in various areas.

Outside of Asia, one of the worst outbreak is in Italy, where around 100,000 people in the northern regions of Lombardy and Veneto are facing travel and other restrictions as the country struggles to contain a sudden spike in cases that has so far seen at least 219 confirmed cases.
Strict emergency measures were put in place over the weekend, including a ban on public events in at least 10 municipalities, after a spike in confirmed cases in both regions.
Italy still has not identified “patient zero,” the source of the coronavirus outbreak in the country, two officials said Monday.
“The important thing is to identify ‘patient zero,’ where he/she is from, and to stop this chain of infection,” Angelo Borrelli, the head of Italy’s civil protection agency, said.
Luca Zaia, the governor of the Veneto region, said “no news” when asked Monday by CNN affiliate Sky 24 about the hunt for the carrier.
Borrelli suggested an explanation for the sudden spike in cases over the weekend: “I believe that the incubation period meant that the infections all exploded at a certain moment.”
In a statement Monday, the European Commission said was providing aid worth $250 million to affected regions and sectors of the EU.
“As cases continue to rise, public health is the number one priority. Whether it be boosting preparedness in Europe, in China or elsewhere, the international community must work together. Europe is here to play a leading role,” said Ursula von der Leyen, the President of the European Commission.
The Commission added that it was stepping up support for member states following developments in Italy.
Stella Kyriakides, commissioner for health and food safety said: “In view of the rapidly evolving situation, we stand ready to increase our assistance. In this vein, a joint expert mission of the European Centre for Disease Prevention and Control and the World Health Organization will depart to Italy this week to support the Italian authorities.”

Across the Middle East, flights from Iran have stopped and borders with the country have been closed as the region tries to keep the spread of a deadly coronavirus at bay.
Iran is on the front line of the outbreak — the health ministry has confirmed 61 cases and 14 deaths.
One Iranian lawmaker, Ahmad Amirabadi Farahani from the holy city of Qom, criticized the government’s handling of the outbreak, accusing officials of covering up numbers. Farahani said 50 people had died from the virus in Qom, the epicenter of the coronavirus outbreak in Iran, though the country’s health ministry has denied his claims.
The heavy economic sanctions imposed against Iran by the US and other bodies have made tackling the disease harder, with the country struggling to access novel coronavirus test kits, a board member of Iran’s Association of Medical Equipment Importers told the semi-official news agency ILNA on Sunday.
Ramin Fallah told ILNA that “many international companies are ready to supply Iran with coronavirus test kits, but we can’t send them money” because of the US sanctions.

Despite the rapid spread of the virus around the world in the past week, health officials are not yet calling this a pandemic — though they’re close.
William Schaffner, a longtime adviser to the US Centers for Disease Control and Prevention, told CNN that “we’re on the knife’s edge.”
There is no precise, mathematical definition of a pandemic. Outbreaks get characterized as pandemics by epidemiologists — who are not yet using the term. They’ll be looking for evidence of sustained transmission among people who have not recently traveled to China or has close contact with someone who recently traveled to China.
As more information emerges over how the virus is being spread in Italy, Iran and South Korea, among other countries, that evidence may soon arise.
Markets have plunged on fears of an imminent pandemic declaration. The Dow has lost more than 1,400 points in the last three trading days, wiping out any gains for the year so far. The S&P 500 and Nasdaq also fell, and Asian markets have been suffering due to the virus and fears of a wider economic downturn.