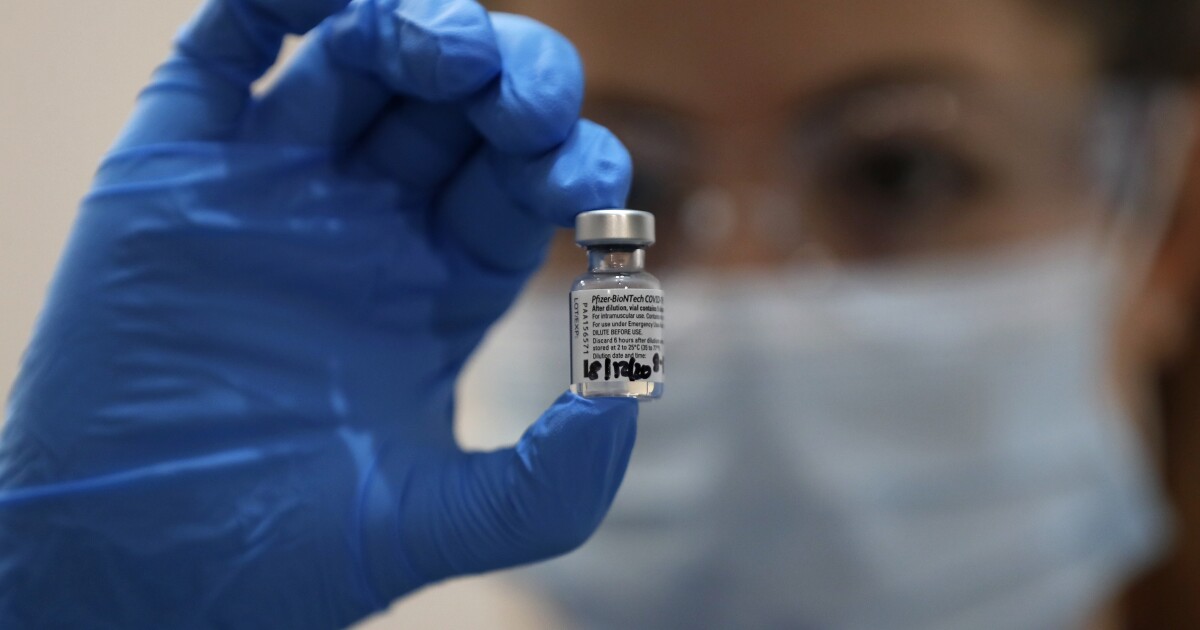 DENVER – People working in COVID-19 wards who have direct contact with patients, and staff and residents at Colorado’s long-term care facilities, will be the first people to receive the Pfizer and Moderna COVID-19 vaccines when they arrive in coming weeks.

That’s according to the finalized vaccine prioritization plan released by the state Wednesday and discussed at a news conference by Gov. Jared Polis, the Colorado Department of Public Health and Environment’s COVID-19 incident commander, and local public health and Colorado National Guard officials.

When are the vaccines coming?

The federal government is allocating the vaccines to states based on their population’s share of the U.S. population. Bookman said that Colorado would likely place its order for its share of the Moderna vaccine on Thursday or Friday this week.

The U.S. Food and Drug Administration (FDA) is expected to grant the Emergency Use Authorization for the Pfizer vaccine sometime between Friday and Monday, and the doses of it would be shipped within 24 hours of the EUA being granted.

The FDA’s Vaccines and Related Biological Products Advisory Committee is holding emergency meetings this week, Bookman said, to give states guidance on how the authorizations will be implemented and vaccines distributed, which he said was a signal that the vaccines would be shipping soon.

As such, Bookman said, Colorado currently expects to receive the Pfizer vaccines between Sunday and Wednesday – depending on when the authorization is granted – and the Moderna vaccines over the same time period the week of Christmas.

Both have efficacy rates of about 95% – higher than the flu vaccine – and immunity typically kicks in for recipients about two weeks after the second dose is administered, Bookman said.

Scientists on Tuesday published the peer-reviewed data for the AstraZeneca vaccine Tuesday in The Lancet, but questions remain about its efficacy for people over age 55, and the data showed it was about 70% effective. While Colorado also includes information on the AstraZeneca vaccine on its website, it is not one of the vaccines officials expect to receive in at least the first month or two of the state’s vaccine plan.

When will I get vaccinated?

The state has essentially split its vaccine prioritization into four phases: Phase 1A, Phase 1B, Phase 2 and Phase 3.

Officials said they hoped to stick to the plans but said those relied on the federal government receiving and sending out vaccines on schedule and at the numbers expected. The state first started discussing the plan publicly, which has since changed, mid-October.

“We know that early doses are going to be very limited,” Bookman said. “Over time, they’ll expand. All will be free. Every county will have access to the vaccine.”

Phase 1A will include vaccinations for the aforementioned group of people working directly with COVID-19 patients, and residents and staff at long-term care facilities, which have seen among the largest outbreaks and number of deaths in Colorado during the pandemic. Bookman said this group would start receiving the vaccines as soon as they are received.

Bookman said the majority of the people in Phase 1A and 1B will get vaccinated through their employer or a local public health agency if they are health care providers, and that staff and residents at long-term care facilities would likely be getting them at pharmacies, like Walgreens and CVS, through a federal partnership program.

Phase 2 recipients will include people age 65 and up, those with chronic medical conditions and health care and essential workers not covered in Phases 1A or 1B. That includes people with chronic lung disease, heart disease and the immunocompromised.

It also will include essential workers who interact directly with the public – such as grocery store workers, school staff, people who work at meatpacking plants and on farms, health care workers who are not covered in either of the first phases – and people who went through clinical vaccine trials but received placebos.

Phase 2 recipients will receive the vaccine in the spring, officials said, after Phase 1B recipients have received theirs.

And Phase 3 of the vaccine distribution is expected to begin in the summer, which will be the phase when the rest of the general public – adults between 18-64 years of age with no high-risk conditions – will have the vaccines made available.

The state has created a new website for people to visit who have questions about which phase of the plan they might be in and has set up a hotline at 1-877-462-2911. The officials who spoke Wednesday said they knew there would be many, many questions from the public.

“As we learn more about Phase 2 and what Phase 3 looks like, we will provide more information about which providers are eligible to give the vaccine and the settings in which they’ll do it,” Bookman said.

The governor said that the finalized priorities were made in a manner to protect the health of those at risk of having the most severe outcomes, like older people who have much higher fatality rates from COVID-19, and those working consistently around patients with COVID-19.

“The moral path for society to take is to protect those far and away more likely to lose their lives to the virus,” he said.

Polis said people who are incarcerated will receive the vaccine on the same timeline as everyone else depending on where the fall in the phase process after several weeks of scrutiny of whether or not they would receive the vaccine as part of the first group or along with the same timeline as the rest of the population. Colorado jails and prisons have, along with long-term care facilities, seen among the largest outbreaks of COVID-19.

He also said that for the moment, the vaccines will be for adults 18 and up only, though he said that if the vaccines end up being approved for children aged 12 and up, the state would modify its program.

Polis and the others who spoke at the news conference Wednesday said there would be local and state vaccine education materials and forums to educate people about the safety and efficacy of the vaccine.

He said the state is also reaching out to community leaders and faith leaders in communities of color to have them work as the ambassadors for education surrounding the vaccine.

Officials also stressed that the vaccination information will be kept private and that no people’s personal information would be shared with the federal government or others.

How will the vaccine be managed?

Colorado performed another chain-of-custody test Tuesday, delivering a box from Denver to Vail that followed the steps people transporting the vaccines will have to follow when they are delivered to the state.

Bookman said Wednesday that the state had created a task force comprised of members of the state emergency operations center, CDPHE, the Colorado National Guard and policymakers to manage the vaccine distribution through all of its steps and make changes and adaptations as necessary.

Brigadier General Scott Sherman, the Director of Joint Staff for the Colorado National Guard, said there are currently eight facilities across the state that will be used as the cold-storage facilities for the vaccines, whose locations are not being released publicly except for to local law enforcement, who will help with security.

Sherman said that a combination of Colorado National Guard soldiers and medical couriers will be tasked with distributing the vaccine from the storage facilities to the health care providers.

During Phase 1, facilities will have to report within 72 hours of reception of the vaccines whether or not they have given the doses out by that point, as they have a shelf life of five days, Bookman said.

“We want to know by Day 3 so we can plan to utilize it or move it to a new location to ensure we don’t waste any resources,” Bookman added.

As many people anxiously await their turn to receive the vaccine, the officials also stressed that the virus will still be active through the next months until the general population can be vaccinated and that they should keep up their mask-wearing, physical distancing and other efforts to keep numbers down.

“Our main focus in creating the plan for Colorado is to ensure that we save the most lives, and end the health crisis, end the pandemic, as soon as possible,” Polis said.

[ad_1] Hospitalized COVID-19 patients who were vitamin D sufficient, with a blood level of …