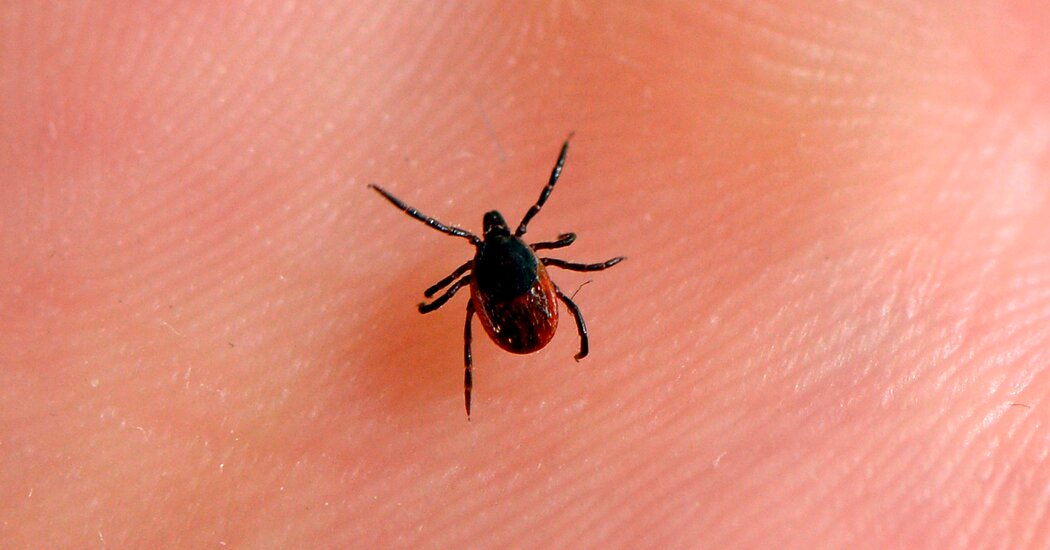 Adding a new weapon to the fight against insect-borne illnesses like Lyme disease and malaria, the Environmental Protection Agency on Monday approved a new chemical that both repels and kills ticks and mosquitoes.

The chemical, nootkatone, an oil found in cedar trees and grapefruits, is so safe that it is used by the food and perfume industries.

Nootkatone is considered nontoxic to humans and other mammals, birds, fish and bees, the E.P.A. said in a statement.

Diseases caused by the bites of ticks, mosquitoes and fleas have tripled in the United States in the last 15 years, the Centers for Disease Control and Prevention said in a 2018 report. They include Lyme disease, anaplasmosis and Rocky Mountain spotted fever from ticks; West Nile, dengue, Zika and chikungunya from mosquitoes; and plague from fleas.

In tropical countries, malaria and yellow fever are major killers; elephantiasis is also spread by mosquitoes. Lethal Crimean-Congo hemorrhagic fever is spread by ticks, and kala azar is spread by sandflies.

Manuel F. Lluberas, a public health entomologist who has worked on mosquito-control campaigns all over the world, said he hoped that nootkatone would be accepted by people who fear synthetic repellents and that it could be made cheaply enough to be bought by foreign aid programs like the President’s Malaria Initiative.

The E.P.A. registration applies only to nootkatone as an active ingredient, the statement said. Any formulations using it in the future will have to be tested and registered separately.

The chemical repels mosquitoes, ticks, bedbugs and fleas — and, in high concentrations, kills them, according to the C.D.C. It may also be effective against lice, sandflies, midges and other pests, some of which can carry lethal diseases.

It is not oily, lasts for hours and has a pleasant grapefruit-like scent, said Ben Beard, deputy director of the division of vector-borne diseases at the C.D.C.

Nootkatone works differently from previous classes of insecticides and can kill bugs that are resistant to DDT, pyrethroids and other common insecticides.

Experts in insect-borne diseases greeted the news with cautious enthusiasm.

“Its use as an insecticidal soap has great potential,” said Duane J. Gubler, a former C.D.C. chief of vector-borne diseases.

One proposed use is in soaps that people in tick-infested areas could shower with, repelling and possibly killing ticks that try to attach to them.

Joel R. Coats, a specialist in insect toxicology at Iowa State University, said his lab had tested nootkatone and found it to be “an impressive repellent but a weak insecticide.”

It repels ticks even better than synthetics like DEET, picaridin or IR3535 do, Dr. Coats said, and it is their equal at repelling mosquitoes.

Unlike citronella, peppermint oil, lemongrass oil and other repellents based on plant oils, he added, nootkatone does not lose its potency after about an hour, but lasts as long as the synthetics.

But although it can also kill insects, he said, doing that takes so much of the chemical that it may not be practical.

“Most plant terpenes will kill bugs if you go to a high enough dose, but I haven’t seen any data that supports using it as an insecticide,” Dr. Coats said, using a term for aromatic oils exuded by many plants to repel invasive insects. “I’ve seen lots of data on it as a repellent.”

Mikkel Vestergaard-Frandsen, owner of the Vestergaard company, which makes insecticide-impregnated nets to fight malaria, said he was interested in the compound, but wanted to know more about it.

Because babies sleep under the nets, any insecticide in them must be very safe.

In many areas, mosquitoes have developed resistance to the pyrethin-based insecticides now used in nets, which are synthetic versions of a chemical found in chrysanthemum flowers.

A version of nootkatone that can linger in netting fabric for years would have to be developed, but good repellents usually dissolve too quickly for that, he said.

They investigated cedar bark and chips “because there are all these folk tales that cedar repels insects — and people keep their clothes in cedar chests,” he said.

Cedar wood itself had very little effect on ticks, he said, but Oregon State University scientists working with the agency found the terpene oil of the Alaskan yellow cedar to be powerfully repellent. The Latin name of the tree is Cupressus nootkatensis, which comes from the Nuu-Chah-Nulth people of Canada.

It is “not known in great detail” how nootkatone works, Dr. Beard said, but it appears to activate octopamine receptors, which in insects send electrical impulses from one nerve cell to the next. Unable to turn off the signal, the bugs twitch to death.

In mammals, adrenaline — which is chemically related to octopamine — performs the same function. But the compound does not trigger adrenaline receptors.

Later the agency realized that the same chemical, originally derived from grapefruit rinds, was used as a flavoring and in perfumes.

The C.D.C. licensed its patent to a Swiss company, Evolva, which isolates the chemical from fermenting yeast.

But doing the safety studies required for E.P.A. registration was too expensive until the 2015-2016 Zika epidemic came along, Dr. Beard said.

That epidemic prodded Congress to appropriate money for mosquito control, and the C.D.C. transferred some of it to BARDA, the Biomedical Advanced Research and Development Authority, which contracted with Evolva to finish the research.

Zika funding “was the key to moving the boulder up the hill,” Dr. Beard said. But since nootkatone works well on both insects, he added, “it wasn’t a bait-and-switch.”