The disease, which researchers called the G4 virus, is genetically descended from the H1N1 swine flu that caused a pandemic in 2009. G4 now shows “all the essential hallmarks of a candidate pandemic virus,” said the study, published in the scientific journal Proceedings of the National Academy of Sciences (PNAS).
But Dr. Angela Rasmussen, a virologist at Columbia University’s public health school, warned the public not to “freak out.”
“Our understanding of what is a potential pandemic influenza strain is limited,” she posted on Twitter. “Sure, this virus meets a lot of the basic criteria but it’s not for sure going to cause a hypothetical 2020 flu pandemic, or even be a dominant strain in humans.”
Chinese researchers based at several institutions, including Shandong Agricultural University and the Chinese National Influenza Center, discovered the G4 virus during a pig surveillance program. From 2011 to 2018, they collected more than 30,000 nasal swab samples from pigs in slaughterhouses and veterinary teaching hospitals across 10 Chinese provinces.
From these samples, researchers identified 179 swine influenza viruses — but not all of them posed a concern. Some only showed up one year out of the program’s seven, or eventually declined to nonthreatening levels. 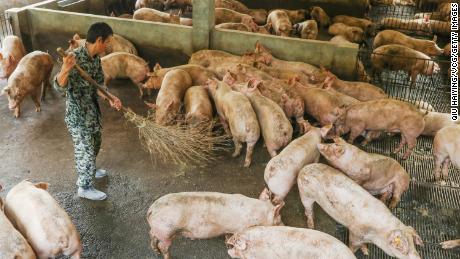 But the G4 virus kept showing up in pigs, year after year — and even showed sharp increases in the swine population after 2016.
Further tests showed that G4 can infect humans by binding to our cells and receptors, and it can replicate quickly inside our airway cells. And though G4 holds H1N1 genes, people who have received seasonal flu vaccines won’t have any immunity.
G4 already appears to have infected humans in China. In Hebei and Shandong provinces, both places with high pig numbers, more than 10% of swine workers on pig farms and 4.4% of the general population tested positive in a survey from 2016 to 2018.
There is no evidence yet that G4 could spread from person to person — perhaps the most promising sign so far, said Carl Bergstrom, a professor of biology at the University of Washington.
“This is not a *new* new virus; it’s been very common in pigs since 2016,” he tweeted. “There’s no evidence that G4 is circulating in humans, despite five years of extensive exposure. That’s the key context to keep in mind.”
However, researchers warn in the paper that the virus was on the rise among pig populations, and could “pose a serious threat to human health” if not carefully monitored. Transmission of the virus from pig to human could “lead to severe infection and even death,” said the study, which called for greater control of the virus’ spread within pig populations.

In 2009, the H1N1 swine flu pandemic killed an estimated 151,700 to 575,400 people globally. In the aftermath, authorities and scientists stepped up surveillance of pig populations to watch for viruses with “pandemic potential.”
Swine flu occurs in people that are in contact with infected pigs. Symptoms are similar to that of regular human influenza and can include fever, lethargy, lack of appetite, coughing, runny nose, sore throat, nausea, vomiting and diarrhea.
After 2009, the H1N1 virus in humans spread back into pigs around the world, and the genes mixed into new combinations — creating new viruses like G4.
“Pig farming is a massive industry in China and pigs can be important hosts from which novel influenza viruses may emerge,” said James Wood, Head of Veterinary Medicine at the University of Cambridge. He added that the study was a “salutary reminder that we are constantly at risk of new emergence of zoonotic pathogens and that farmed animals, with which humans have greater contact than with wildlife, may act as the source for important pandemic viruses.”
To decrease the risk of a human pandemic, Chinese farmers and authorities need to control the spread of the virus among pigs, and closely monitor people who work with the animals, said the team.
<!–

The new study comes as the world grapples with the Covid-19 pandemic, which has now infected more than 10.3 million people globally and caused more than 505,000 deaths, according to data from Johns Hopkins University.
The central Chinese city of Wuhan is ground zero for the novel coronavirus, which emerged in December last year and began spreading internationally in January. The outbreak prompted China to impose strict lockdowns nationwide, closing local and provincial borders and ordering residents to stay at home.
The country began reopening in March after largely containing the virus — but new outbreaks and local transmissions in recent weeks have seen some cities go back under lockdown.