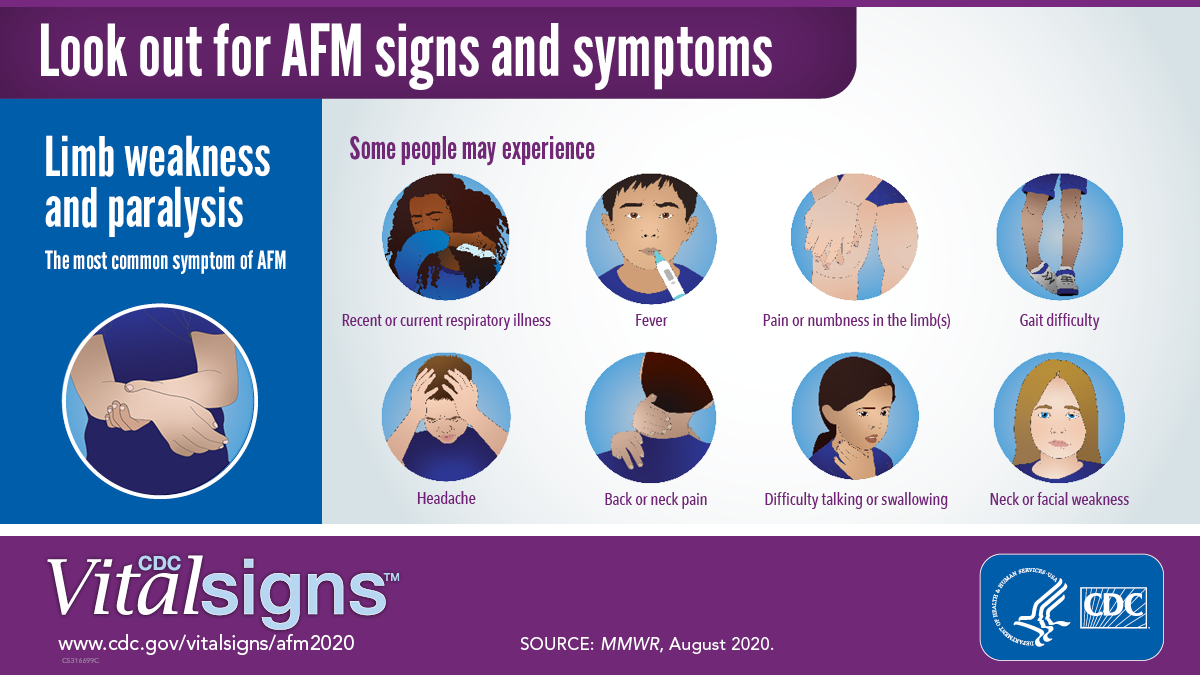 The CDC warned Tuesday that 2020 is likely to be a peak year for an uncommon but dangerous and potentially life-threatening neurological disease affecting children, acute flaccid myelitis.

The illness, also known as AFM, is believed to be caused by a virus and peaks every two years between August and November. In 2018 there were 238 confirmed cases, with half in children ages 5 and under.

The agency specifically warned that doctors need to be aggressive about hospitalizing and treating affected children at the first sign of illness, particularly sudden limb weakness.

“AFM can progress rapidly over the course of hours or days, leading to permanent paralysis and/or the life-threatening complication of respiratory failure in previously healthy patients, so delays in care can be serious,” the CDC said in a statement.

“Parents and doctors should suspect AFM in patients with sudden limb weakness, especially during August through November. Recent respiratory illness or fever and the presence of neck or back pain or any neurologic symptom should heighten their concern.”

A group of children in Colorado is showing polio-like symptoms, and doctors wonder if it may be linked to a nationwide enterovirus outbreak. Erika Edwards reports.

According to CDC statistics, more than half of people with AFM end up in an ICU and nearly a quarter require a ventilator.

Surveillance began in the United States for AFM in 2014, and the disease has consistently peaked every two years since in the late summer and early fall, leading to Tuesday’s warning.

The disease particularly spikes during the month of September; 37 percent of 2018’s cases happened then.

For parents, the warning comes at an incredibly fraught time, with questions over whether the coronavirus pandemic should keep kids from returning to school in the coming weeks.

That includes concerns over MIS-C, a rare and sometimes fatal inflammatory complication of COVID-19 that strikes children.

A crippling polio-like disease that’s sickened dozens of kids in the U.S. is now showing up in New Jersey. Rana Novini reports.