Most of the faculty at a southern Minnesota high school can’t wait to get the shots that will protect them against COVID-19. But an instructor who teaches business classes said he’s not ready to take it, and he fears that his refusal to get vaccinated will prevent him from returning to his classroom.

“My kids are everything to me, my classroom is everything, but I’m not going to take the vaccine,” said the teacher, who asked not to be identified by name because he didn’t want to antagonize administrators at his school.

He’s not an “anti-vaxxer.” He’s had all the usual childhood vaccinations, and he gets a flu shot each year. But the COVID-19 vaccines feel different to him. He worries they were rushed out too fast and might have long-term side effects that won’t emerge for years.

“I’m not saying never, ever, ever,” he said. “But I am saying I don’t feel like I’m informed enough to make a smart decision.”’

He’s hardly alone. A recent survey by the Kaiser Family Foundation found that 27% of Americans are “vaccine hesitant,” saying they probably or definitely would not get a COVID-19 vaccine even if it were available for free and deemed safe by scientists. Among healthcare workers who are first in line to get vaccinated, that number is even higher: 29%.

Can they be fired if they refuse to get vaccinated? Should they lose their jobs if they won’t do their part to achieve herd immunity?

Questions like these will be asked with increasing frequency as more doses of COVID-19 vaccine become available in the weeks and months to come. And there are no easy answers. 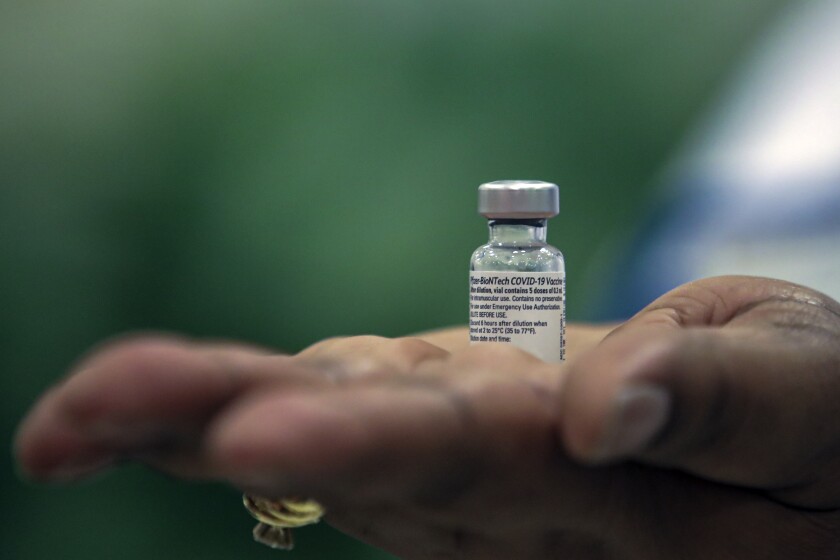 Health experts hope to nudge people of color to the front of the COVID-19 vaccine line without explicitly saying race, ethnicity influence priority.

How does Britain’s Oxford-AstraZeneca vaccine compare?
Hiltzik: Unsurprisingly, Trump’s rollout of the COVID vaccine is an utter fiasco

The legal issues alone are complicated. An employer can establish a mandatory vaccination policy if the need for it is job-related or if remaining unvaccinated would pose a direct threat to other employees, customers or themselves, according to guidance released last month by the U.S. Equal Employment Opportunity Commission.

For instance, a dentist could make a case that an unvaccinated hygienist would be a danger to others, or a retailer could say a cashier is at risk because of daily exposure to customers.

But there are two main exceptions, said Michelle Strowhiro, employment law partner at McDermott Will & Emery. Employees can object to the vaccine if they think it will exacerbate an established disability or medical condition. They can also turn it down if it goes against their sincerely held religious belief.

In either case, the employer and employee work together to find a reasonable way to accommodate the worker, such as allowing them to work from home instead of going into an office, Strowhiro said. If they work on-site, they can be moved to an area where they’re less exposed to other employees.

If the exemption is based on a religious belief, an employer may deny a potential accommodation that would be more than a small cost or burden, Strowhiro said. For disability-related objections, the bar is higher.

Ultimately, though, employers have the final say on how far they’re willing to go to accommodate an employee, she said. If they can’t find a reasonable accommodation, an unvaccinated worker can be fired — though such drastic action could prompt a lawsuit, she said.

How will the self-employed get vaccinated? There’s no clear answer 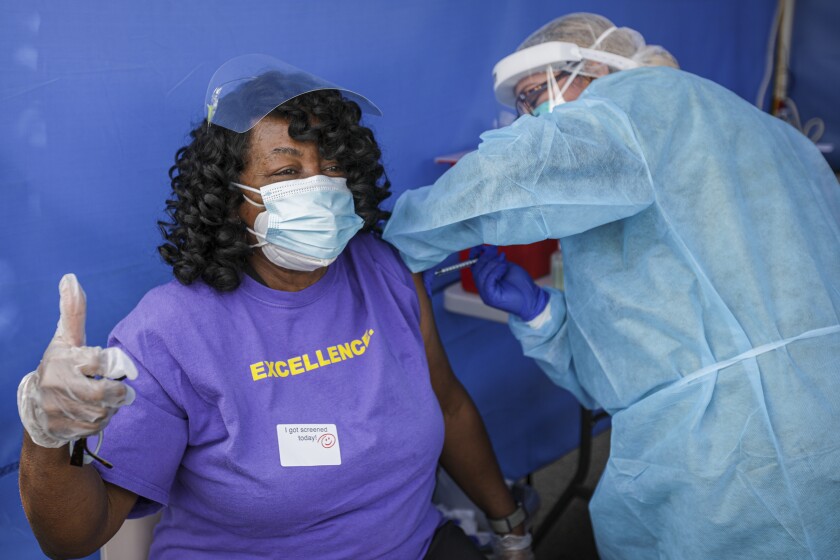 How will the self-employed get vaccinated? There’s no clear answer

Nurses, janitors and others who are self-employed in jobs that expose them to COVID-19 are looking for answers on when they can get vaccinated.

And though employers could require workers to take the COVID-19 vaccine, it’s more likely they’ll make it voluntary.

For starters, a vaccine mandate could invite a lawsuit, said Karla Grossenbacher, an attorney at Seyfarth Shaw who chairs the law firm’s labor and employment practice in Washington, D.C.

Considering that a completely vaccinated workforce is a long shot even with a mandate, “at the end of the day, do you want to get hung up in litigation over all this?” Grossenbacher said. “Probably not.”

The fact that the Food and Drug Administration sanctioned the vaccines through an emergency use authorization procedure instead of its usual approval process may also make a mandate trickier.

Vaccines for diseases such as polio, measles and whooping cough have been around for decades, and their track records inspire confidence that they’re safe and effective. The same can’t be said of the COVID-19 vaccine — at least, not yet.

Fear is a powerful motivator, and the belief that the COVID-19 shots were developed too quickly and haven’t been through enough safety testing “leads to people coming up with more inventive ways to legally challenge a requirement to get a vaccine,” Grossenbacher said.

Even in cases in which a vaccine mandate can be legally enforced, there may be ethical reasons not to, said Ruth Faden, founder of the Johns Hopkins Berman Institute of Bioethics.

For example, a long history of unequal care and outright abuse from medical and public health professionals has given Black, brown and Native communities good reason to be suspicious of a vaccination campaign, Faden said. She calls it “justified distrust.”

Indeed, a survey by the Public Policy Institute of California found that 69% of Black adults in the state would definitely or probably skip the vaccine, along with 43% of Latinos. (By contrast, 35% of white respondents and 30% of Asian Americans shared that view.)

Column: Her bestie died of COVID-19. Now she is helping Black people find trust in vaccines Column: Her bestie died of COVID-19. Now she is helping Black people find trust in vaccines

Black Americans are overwhelmingly resistant to taking a COVID-19 vaccine. But Clarice Kavanaugh wants to be an influencer to change minds.

At the same time, others may have social, cultural or political reasons for not wanting to get vaccinated. For example, the Kaiser Family Foundation poll found that across the country, 42% of Republicans are vaccine hesitant, compared with 12% of Democrats and 31% of people who described themselves as independents.

“Do we want to distinguish between people who we think have a good reason to not want to be vaccinated and those who don’t?” Faden said. “That’s an ethical conundrum and a political nightmare.”

Another factor to consider is that although the two vaccines authorized so far are at least 94% effective in reducing the risk of developing COVID-19, whether they also reduce the risk of transmitting the coronavirus to others has not yet been tested. In some scenarios, that lack of evidence may weaken the ethical imperative for requiring it.

After all, if a vaccinated teacher can still infect his students, and a vaccinated restaurant worker can spread the virus to her customers, does that diminish the rationale for requiring them to get the shot?

“You have to have a good reason to give people about why it is ethically right for them to subject themselves to a vaccine they don’t want to get,” Ogbogu said.

You have to have a good reason to give people about why it is ethically right for them to subject themselves to a vaccine they don’t want to get.

Ubaka Ogbogu, professor of law and bioethics at the University of Alberta

Data on how effective the vaccines are at stopping the spread of the virus should be coming in the next few months, Faden said. Until then, employers might encourage their workers to get vaccinated but stop short of requiring it, she said.

Ogbogu added that workers who have managed to avoid an infection so far — such as intensive care unit nurses who have been fastidious in using personal protective equipment and following other safety measures — may rightly feel they don’t need a vaccine to keep themselves and others safe. In that case, he said, there is little ethical reason to mandate a vaccine they don’t trust.

But a mandate might be in order if “you are able to show the vaccine is the only thing that would prevent them from transmitting the disease,” he said.

He added that even after vaccines are widely available, employers will still be responsible for providing PPE and other safety equipment; they can’t rely on the shots alone to keep their workforces safe.

Ogbogu said he would rather take his chances with a COVID-19 vaccine that hasn’t killed anyone than with a virus responsible for more than 388,000 deaths in the U.S. alone.

“My reasoning is that getting the disease itself is worse than getting the vaccine,” he said.

Haves vs. have-nots: Who ‘deserves’ to be next in line for the COVID-19 vaccine? 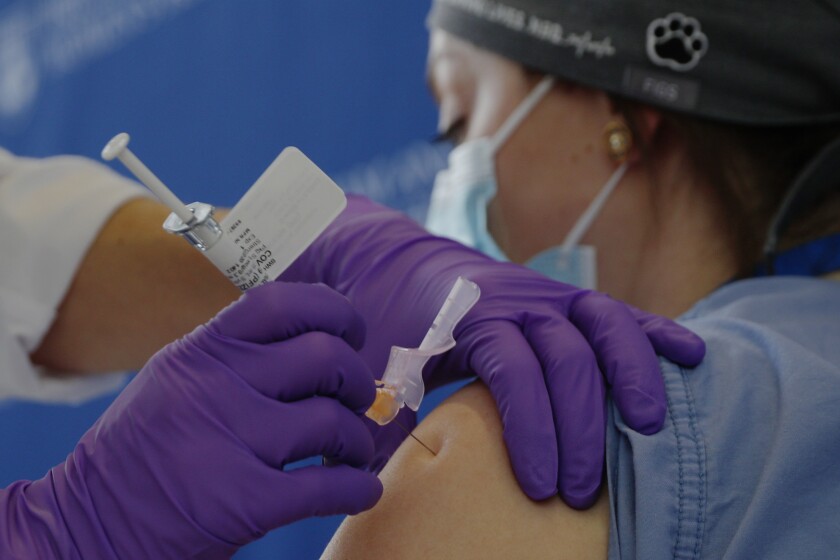 Haves vs. have-nots: Who ‘deserves’ to be next in line for the COVID-19 vaccine?

Americans waiting their turn for a COVID-19 vaccine may not be pleased to see who’s in line ahead of them. Does a prisoner or smoker deserve it more?

Workers are grappling with these issues as well.

In her 20 years at the hospital, she has never seen chest X-rays as bad as the ones from COVID-19 patients. “They can turn within hours and end up on a ventilator,” Helgeson said. “For so much of the public to not believe it’s real still is scary to me.”

Helgeson usually skips the flu shot but was heartened by the 95% efficacy of the COVID-19 vaccine from Pfizer and BioNTech, which she received last week. She’s due to get her second dose Wednesday.

“This obviously is not the flu, and I need to trust science right now,” she said. “This is our best hope, honestly.”

She said most members of the radiology department were more than happy to get the vaccine. For many, posting photos of themselves getting their shots or showing off their COVID-19 vaccination cards was “a badge of honor.”

Even so, she said, the shots should be “highly suggested” but not mandatory — especially because those available rely on messenger RNA, a technology that hasn’t been used in vaccines before.

Colton Wheeler, a meat cutter at a Vons grocery store in La Crescenta-Montrose, said he plans to get the vaccine when he’s eligible because he wants to protect himself and his family from the virus.

“We’re just at the front line,” said Wheeler, who has worked at the supermarket for 14 years. “We’re ground zero.”

He said he and his co-workers in the meat department are working longer hours to fill in for their colleagues who are out sick with COVID-19 or exhibiting symptoms of the disease. He said he’s in favor of a company-wide vaccine mandate to bolster the health and safety of workers.

“That’s how it’s been spread — employee to employee,” Wheeler said.