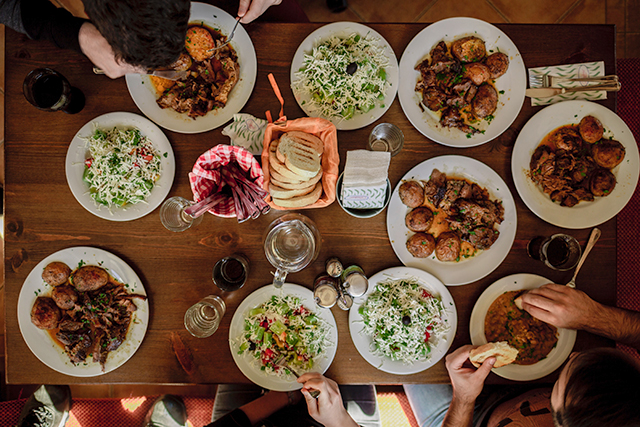 If you want your children to eat more fruits and vegetables, then you’re going to have to start doing the same.

And both parents — not just the mom — need to be responsible for modeling that healthy behavior.

Those are the key messages from a Finnish study published this month in the journal Food Quality and Preference.

“Teaching children to eat their greens is not something mothers should be doing alone,” says Kaisa Kahkonen, the study’s lead author and a dietician and researcher at the University of Eastern Finland, in a released statement. “A positive example set by both parents is important, as is their encouragement of the child.”

That may seem like an obvious point, but it’s one that apparently hasn’t been investigated much before now. Most past studies that have examined parental influences on children’s dietary habits have tended to focus on mothers’ rather than fathers’ eating habits.

The purpose of the current study was to see how both moms and dads influence their young children’s consumption of raw vegetables, cooked vegetables, berries and fruits.  (In Finland, people tend to think of berries as being separate from other fruits).

Children’s dietary habits are shaped from earliest childhood. Individual personality traits — how unwilling a child is to try new foods, for example — can impede efforts to encourage a child to make healthy food choices. But environmental factors, including the conscious and unconscious education children receive from parents and other adult caretakers, also play a crucial role.

For their study, Kahkonen and her colleagues recruited 100 parents of 114 children aged 3 to 5 years old. Each of the families had both a mother and a father living in the same house. Families whose child had a medical condition that requires close attention to food choices — specifically, food allergies, type 1 diabetes and celiac disease — were excluded from the study.

The parents filled out a series of detailed surveys, which included questions about the family’s eating habits, such as what they ate on a typical day, how often they ate raw and cooked vegetables and fruits and when they sat down together for meals. One set of questions measured the extent to which each member of the family was unwilling to try unfamiliar food.

Those figures showed that many young Finnish children are not getting enough fruit and vegetables to meet their country’s dietary recommendations.

(The eating habits of U.S. children are even more problematic. A 2014 report from the Centers for Disease Control and Prevention  found, for example, that 60 percent of U.S. children aged 2 to 18 were not getting enough fruit, and 93 percent were not getting enough vegetables. For 3- to 5-year-olds “enough” is a minimum of 1-1½ cups of vegetables and 1-1½ cups of fruit daily.)

The influence of moms and dads

The mothers in the current study ate significantly more vegetables (both raw and cooked) and more berries and other fruit than did the fathers.

The study found a strong association between the mothers’ eating habits regarding fruits and veggies and those of their children. In other words, the children with mothers who ate a lot of those foods tended to eat more of them, too.

An association was also found between the fathers’ consumption of fruits and veggies and thequantity of those foods eaten by their children. The link was strongest for cooked vegetables.

“Therefore, our results support the view that fathers’ role should not be belittled, but considered equally with mothers instead,” they add.

Surprisingly, the study found only a weak association between shared meals and how much and how often children consumed fruits and vegetables. That result was unexpected, given that many previous studies have found a positive connection between family meals and a healthier diet.

“It could be that family meals do not set the demographic of under-school-aged children apart, as they nearly always eat with their parents anyway,” the researchers explain. “[T]he results might have been different with older children.”

This was a small study, involving only Finnish families, so its findings may or may not be applicable to families living elsewhere. In addition, the study relies on dietary information provided by parents — information that may not be accurate.

But the findings are in line with plenty of previous research on how mothers’ dietary decisions influence those of their children. They also underscore the importance of educating children about how to make healthier food choices.

“This study suggests placing greater emphasis on the serving of vegetables at dinner,” the researchers write. “For example, vegetables can be served as a main dish, as an accompaniment to a main dish and as salad.”

The researchers also urge parents to mix up the way vegetables are prepared and served to help minimize the bitterness associated with many of them — and to help children overcome their dislike of trying new foods.

“Variation can be created by serving raw vegetables, such as the ever-popular cucumber and tomato, accompanied by cooked ones,” says Kahkonen. “In fact, many root vegetables, cabbages and squashes are best served cooked.”

Oh, and parents — make sure you eat your fruits and veggies, too.

FMI:  You’ll find the study on the Food Quality and Preference website.