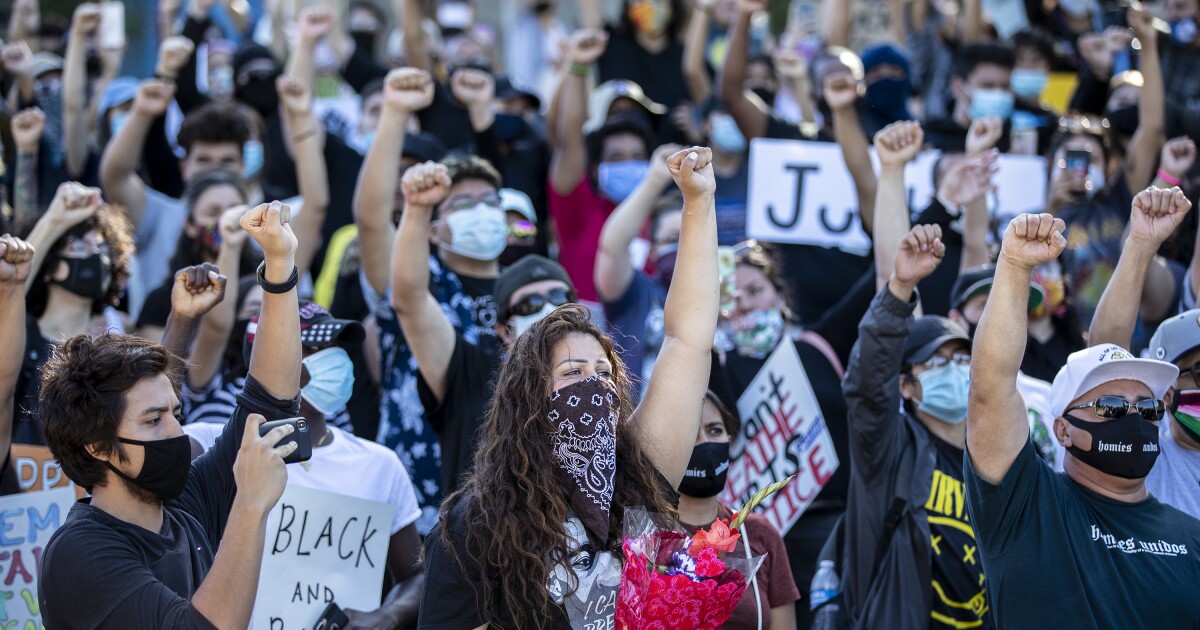 Health officials want you to get tested for the coronavirus if you’ve been to a protest or any large gathering where people haven’t worn masks.

The director of public health for Los Angeles County, Barbara Ferrer, says if you’ve been a part of any large crowd where people haven’t been wearing face coverings, and you were in close contact for at least 15 minutes, you should get tested.

But don’t get tested too early after attending a large event, she said. If you get tested too soon, “you’re likely to test negative,” Ferrer said Friday, “because your viral load will be too low to be detected yet on a test.”

She also warned that testing negative was not a reason to drop your guard. Even if you’ve tested negative, “you still need to remain away from others for 14 days after you’ve had your exposure.”

COVID-19, the disease caused by the coronavirus, can have a long incubation period, generally as long as 14 days.

And if you live at home with older people or someone with an underlying medical condition, “it’s particularly important that you maintain six feet of distance and you wear a face covering — even while you’re with them at your home,” Ferrer said.

She also advised those with exposure to large crowds that included unmasked participants to avoid preparing food for others; avoid sharing utensils, bedding and towels; and increase cleaning and disinfection of common surfaces.

The U.S. Centers for Disease Control and Prevention last week also warned of the potential for large gatherings to seed outbreaks.

“I do think there is a potential, unfortunately, for this to be a seeding event,” said Dr. Robert Redfield, director of the U.S. Centers for Disease Control and Prevention, at a congressional hearing Thursday. The way to minimize that is, he added, to have each individual step up and get tested and recognize that it’s how they can protect love ones. “In three, five, seven days, go get tested, make sure you’re not infected.”

Many health experts have supported the right of protesters to protest the killing of George Floyd, a black man who died after a white Minneapolis police officer placed his knee on Floyd’s neck for over eight minutes.

More than 1,000 people — among them infectious disease and public health experts — have signed a letter advocating for anti-racism demonstrations, saying the effects of racism causes deep public health disparities.

“White supremacy is a lethal public health issue that predates and contributes to COVID-19. Black people are twice as likely to be killed by police compared to white people, but the effects of racism are far more pervasive,” the letter says, leading to dramatic disparities in life expectancy, maternal and infant mortality, and chronic medical conditions. “They result from long-standing systems of oppression and bias which have subjected people of color to discrimination in the healthcare setting, decreased access to medical care and healthy food, unsafe working conditions, mass incarceration, exposure to pollution and noise, and the toxic effects of stress.”

The letter urges protesters to try to decrease their risks of contracting the coronavirus by using face coverings and to stay at least six feet away from other people or, if that’s not possible, demonstrate consistently alongside a single group of people, rather than extensively intermingling with other large groups.

The letter also calls on police to stop using tear gas, pepper spray or other respiratory irritants to subdue protesters, which will only cause people to cough, shout and scream, potentially sending infectious droplets to others, said Dr. Peter Chin-Hong, a professor of medicine and an infectious diseases specialist at UC San Francisco, who helped edit the letter.

Dr. Anthony Fauci, the federal government’s top infectious diseases expert, told the Washington, D.C., radio station WTOP-FM on Friday that large demonstrations were “a perfect setup for further spread of the virus,” because demonstrators are physically close to one another and chanting and yelling.

He urged demonstrators to keep their masks on at all times. Sometimes, Fauci said, he’s observed on TV that some protesters take off their masks when they start to demonstrate.

The science shows that large gatherings of any kind — funerals, church gatherings, conferences, festive events like Mardi Gras — have played an outsize role in fueling the spread of the disease. And although transmission can happen easily indoors, it can also happen outdoors.

Scientists studying festive gatherings in Germany that were held outside found that the risk of transmission was 2½ times greater as a result of people joining together in large groups, Dr. Scott Gottlieb, a former commissioner of the U.S. Food and Drug Administration, told the CBS News program “Face the Nation” on Sunday.

“We’re likely to see cases go up,” Gottlieb said. But he added it would be difficult to determine whether cases increased due to the protests or because of the reopening of the economy.

[ad_1] When you reach a certain age, it is surely right to cut back …