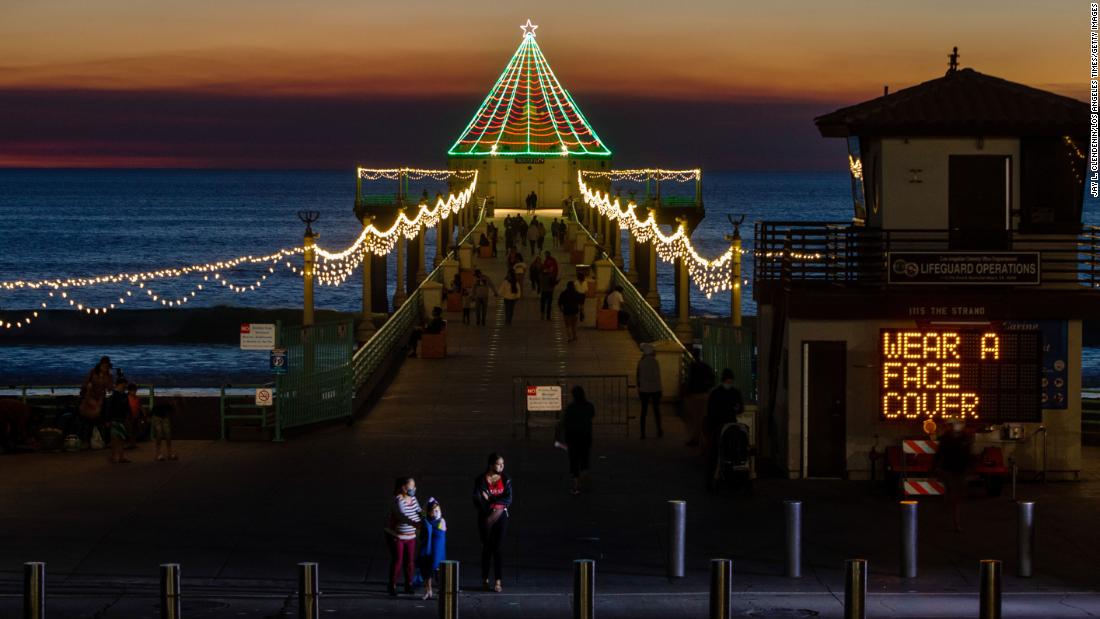 “People are going indoors, they’re not minding the three W’s,” Health and Human Services secretary, Alex Azar, told Fox News’s Chris Wallace Sunday. “Our advice is always the same. Wash your hands, watch your distance, wear face coverings.”
Health experts have long warned that the holiday season would bring a spike in coronavirus cases as people increasingly gather indoors. As of Sunday, the US averaged 196,233 new cases over the last week, another record high, according to a CNN analysis of Johns Hopkins data.
More than 14.7 million confirmed cases have been reported in the US since the pandemic began, and more than 282,310 people have died.
And with the recent spike in cases, record hospitalizations have followed. On Sunday, 101,487 patients were in the hospital with the virus, the fifth consecutive day the US surpassed 100,000 hospitalizations.
Only a week after millions traveled for the Thanksgiving holiday, the US has still not seen the full effects of a potential surge of infections fueled by the gatherings. And Azar told ABC’s George Stephanopoulos the holiday season might have more devastation in store.
“We’re worried about people and the behaviors coming up with Christmas,” he said. “We want to make sure everyone’s loved ones are there next Christmas, especially when we have so much hope of vaccines.”

States reporting records with the worse still to come

Before vaccines can be distributed widely to residents, states must contend with the surge on top of a surge experts say could be coming after the winter holidays.
Kentucky Gov. Andy Beshear said the state just underwent “our highest week to date.” The state reported ten confirmed deaths, a positivity rate of 9.75% and 2,567 new cases as of Sunday evening — the second highest for a Sunday in Kentucky.
While the rate of growth appeared to be slowing, he said, it is still unclear whether data will show “a Thanksgiving surge” later this coming week.
New Jersey and California saw record highs for cases reported in one day. New Jersey reported 6,046 Sunday, topping the previous all-time high recorded Friday, according to Gov. Phil Murphy.
In the more populous California, the new record high was more than 30,000 cases on Sunday. The state also reported an all-time high for hospitalizations with 10,624 patients, according to the California Public Health Department Covid-19 dashboard.
And in Maine, which has the second lowest total of reported cases per capita, the number of infections since October 31 has more than doubled, according to data from the Maine Center for Disease Control and Prevention.

Though there are still hurdles for vaccine candidates to jump, Moncef Slaoui, chief scientific adviser of Operation Warp Speed said Sunday he hopes to see a “quite significant” drop in coronavirus illness and death among the elderly population quickly.
Noting that 40% to 50% of US deaths are coming from elderly Americans residing in long-term care facilities, Slaoui told CNN, “We should be able to have immunized that full population, and the health care workers that take care of them by the end of the month of December or by the middle of the month of January.”
By the middle of March, he said, the United States should have vaccinated its highly susceptible population, which is about 100 million people, while the rest of the country “will not all have the vaccine in our arms before May or June.”
Both Moderna and Pfizer have submitted vaccine candidates to the US Food and Drug Administration for emergency use authorization. The FDA will meet Thursday to decide on authorization for Pfizer’s vaccine.
“I frankly expect them to approve it very quickly,” Slaoui, adding the prediction was based on the data he saw.
“The vaccine’s highly effective. The vaccine is safe. Its safety profile is comparable to that of many other vaccines that have been in use for years and decades. The manufacturing of these vaccines is very well done. The quality of manufacturing is excellent,” Slaoui said.
Manufacturing the vaccine has been “somewhat more complicated and more difficult than we planned,” Slaoui said, adding that scientists are six to eight weeks behind “an ideal scenario where we would have had 100 million doses by the end of this year.” The nature of fast-tracking a vaccine means more issues may arise, he said.
The vaccine, which will come in two doses — a challenge to produce and distribute in the necessary quantities — will likely reach healthy, non-elderly Americans with no known underlying health conditions in late March to early April, said Dr. Anthony Fauci, director of the National Institute of Allergy and Infectious Diseases.