She’s a member of group 1B, the second group eligible for the vaccine on the state’s priority list. She has a pre-existing condition that makes her more susceptible to the coronavirus, with her priority designation only following that of first responders, health care workers and nursing home residents.

So when the state announced on Tuesday that vaccine providers could immediately begin inoculating members of the second group, which also includes anyone 65 and older, Beckley called around. For hours.

Four different providers couldn’t give her the vaccine, but for different reasons — one wasn’t open, another said they only had enough doses for medical workers, a third ran out of their supply and a fourth was going back and forth with her over a convoluted email chain.

It didn’t make sense. A day prior, Gov. Greg Abbott said state data showed a “significant portion” of Texas’ coronavirus vaccine allotment was sitting on shelves. The commissioner of the Department of State Health Services urged all providers to immediately begin inoculating members of the second group, saying he didn’t want any dose unused.

But on the ground, providers across the state say they have run out of supply — and many still haven’t worked their way through the first priority group of frontline workers. And while Beckley was eventually able to book a coveted appointment next week, others in group 1B haven’t had such luck, and they are unsure where to turn or who to consult to get a shot.

“There’s all confusion,” Beckley said. “There’s nothing smooth about this.”

As of Wednesday, state data indicates that 205,463 people have received a coronavirus vaccine, while 678,925 doses have been distributed to vaccine providers — pharmacies, hospitals and other entities — across Texas.

But that data doesn’t fully capture the scene. The state’s reporting system experienced an ingestion error over the Christmas holiday that has excluded about 48,000 doses from official data. Another 27,000 vaccines aren’t uploaded yet because some providers have used the wrong number to classify themselves while submitting immunization data to the state, said DSHS spokeswoman Lara Anton. Those issues should be fixed over the coming days.

Then, another 144,400 doses of the Moderna vaccine — one of two currently approved by the federal government — were delayed during shipment, arriving a week later than intended. Providers didn’t begin receiving those doses until Monday or Tuesday, but they were reflected in the state’s data earlier.

And there’s the usual reporting lag. Providers have 24 hours to submit their vaccination data to the state, and then it takes another 24 hours for that data to be reflected on the public dashboard.

“It’s possible” that saying a “significant portion” of coronavirus vaccines were sitting on shelves may have been an overstatement, Anton said. DSHS Commissioner John Hellerstedt had first issued a letter to providers urging them to use up all available supply last week, when the extent of those shipment delays and technical errors wasn’t fully known, she said.

“A lot of things (were) contributing to numbers looking lower than somebody thought they should be,” Anton said. 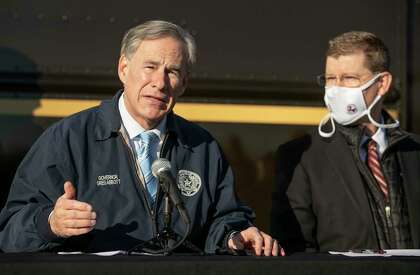 Now, as the state moves into the second eligible group of Texans, the issue is supply. Anton said the state is not currently in a spot to hand out extra vaccine doses, since they await a weekly allotment from the federal government, and sometimes don’t know the number of doses they’ll receive until the last minute.

In Houston, hospitals that are part of the Texas Medical Center said they are swiftly dispersing the vaccines they have received, and were keeping none in reserve.

Baylor St. Luke’s Medical Center reported Wednesday it had administered more than 95 percent of the 5,850 doses of the Pfizer vaccine it had on hand. Houston Methodist had dispersed 19,000 of the 30,000 doses through Wednesday, though the hospital had just received about 10,000 of those doses a day earlier, a spokeswoman said.

“We have begun vaccinating those 75-plus this week by reaching out to our patients who have used our facilities in the past two years,” Methodist spokeswoman Stephanie Asin said in a statement. “We will then move to 65 plus.”

Bexar County has about 140,000 frontline health care workers eligible to get the vaccine now, but the county has only received about 50,000 doses. Another 40,000 doses are supposedly on the way, but it still is not enough to vaccinate everyone in Phase 1A, which will remain the priority, said Colleen Bridger, the interim director of San Antonio’s Metropolitan Health District.

As of Tuesday, more than 31,000 people in the county had been vaccinated, with that number increasing every day. On Dec. 23, the county received a shipment of 1,100 vaccines and used them all within three days, Bridger said.

County Judge Nelson Wolff, who was vaccinated Wednesday, said doses “are not sitting on the shelf” at University Hospital, the county’s public district hospital. Shelley Kofler, a spokeswoman for University Health, said they had received 6,475 doses of the Pfizer vaccine and had used more than 6,000 of them as of Wednesday.

Both University Health and CHRISTUS Health in San Antonio are preparing to start offering the vaccine to people in Phase 1B on a larger scale next week. A spokeswoman for Methodist Healthcare said more details about expanding vaccination to people in Phase 1B will be available in the coming days.

“Throughout San Antonio we have not quite gotten through that entire first phase and in fact have not even received enough vaccine in order to do so,” Bridger said. “We are planning for large-scale rollouts of the vaccine when the supply becomes available and is shipped to us.”

H-E-B, one of the largest retailers in Texas offering the coronavirus vaccine, received about 28,000 doses of the vaccine on Christmas Eve. That allocation translated to about 100 doses per store, and “those don’t last very long,” said Dya Campos, H-E-B’s director of government affairs.

The company has already exhausted that initial allotment, Campos said. H-E-B is not currently offering the vaccine to members of the second priority group, since it’s still working through eligible frontline workers and long-term care residents.

Once the pharmacy receives more doses, it will open up an online scheduler where people can sign up to receive the vaccine, she said.

“The issue with vaccinating 1B right now is supply,” Campos said. “As soon as we receive more supply, we can broaden the group that we are currently vaccinating. … There’s not a lot of lee time in the process. That can be frustrating for the general public. It’s a very complicated and fast-moving process.”

Smaller, local providers are experiencing similar issues. At 38th Street Pharmacy in Austin, co-owner Jeffrey Warnken said he received 200 doses of the vaccine on Monday — and he’s almost through his allotment already. The rest of the available shots are already scheduled to go into people’s arms by Monday.

“You want to send us more doses?” he said. “We will vaccinate these people, this is great. But I don’t have any. All my doses have been accounted for.”

And while members of the second prioritization group are struggling to find available doses, some members of Phase 1A say they are still left on the sidelines.

Margo Rocha, a San Antonio resident who works as a monitor technician at University Hospital, said she received her first vaccine dose about two weeks ago — but her husband, who works directly with patients at a gastroenterology practice, has been told he doesn’t qualify as a frontline worker to receive the vaccine.

“I’m happy I got it, and I’m not happy he couldn’t,” Rocha said Tuesday. “He’s willing to get it, but he doesn’t know who to ask except (his) employer, but the employer is told no. … If you can’t go to your employer, who do you go to?”

Tony Dasher, a professor at the Feik School of Pharmacy at the University of the Incarnate Word in San Antonio, said many community pharmacies were likely caught by surprise when the state suddenly authorized the vaccination of people in Phase 1B Tuesday, making it difficult for pharmacists to coordinate the administration of the vaccine while still managing their businesses.

“Pharmacy has really prepped for this and they are ready, but unfortunately there are other limiting factors that are going to lead to dissatisfaction at the end of the day,” he added. “I think pharmacies will do their part if the state does theirs.”

Anton, the DSHS spokeswoman, reiterated that because supply is still limited, members of group 1B should regularly check in with their primary care doctors and other providers to check on availability.

The governor’s office, meanwhile, touted the statewide effort to vaccinate Texans as quickly as possibly, while doubling down on the assertion that some providers may not be making use of vaccines provided to them.

“With new shipments arriving each week provided at no cost, the state of Texas urges providers to swiftly vaccinate as many people as possible from the at-risk groups rather than these life-saving vaccines and medications sitting on shelves,” Abbott spokeswoman Renae Eze said in an email.