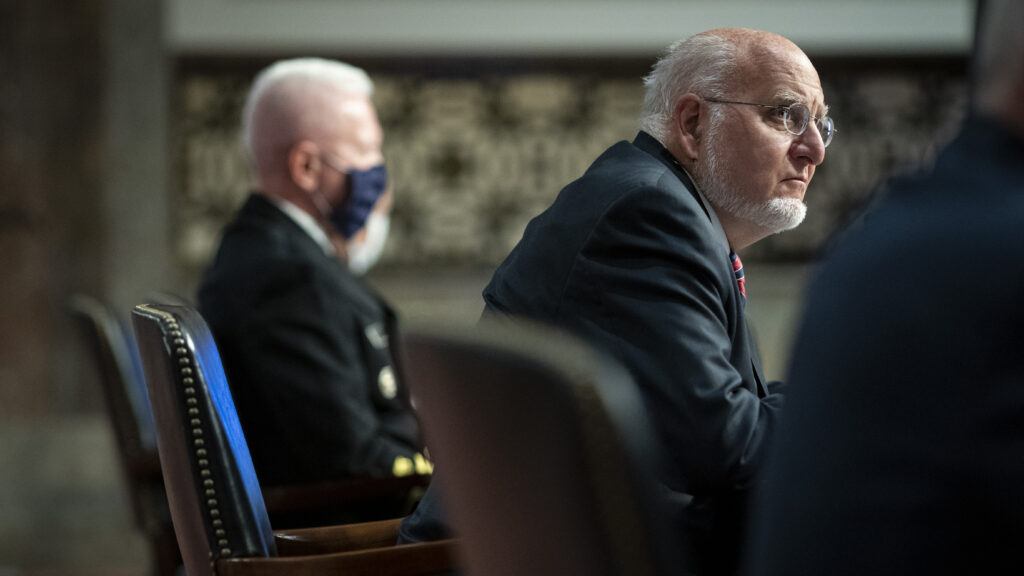 In his first address to the staff of the Centers for Disease Control and Prevention, Robert Redfield called the Atlanta-based agency “the best science-based, data-driven agency in the world.”

His voice breaking repeatedly as he tried without success to hold back tears, Redfield — named director of the CDC in March 2018 — told thousands of employees he had long dreamed of leading the prestigious institution, considered the gold-standard for public health agencies around the globe. He made them a solemn vow.

“My pledge to you is that I will work to continue this legacy,” said Redfield, a virologist and physician who specialized in the care of people with HIV. “We’re not an opinion organization. We’re a science-based, data-driven organization. That’s why CDC has the credibility around the world that it has.”

Now, 2 1/2 years into his tenure, the storied agency finds itself in new and treacherous waters, its reputation stained, and the morale of its staff at a historic low, current and former CDC insiders told STAT. Many say Redfield is not doing enough to safeguard the reputation of the CDC and the integrity of its work, and that he is failing to successfully fend off political interference that is eroding Americans’ trust in the organization.

“I find it concerning that the CDC director has not been outspoken when there have been instances of clear political interference in the interpretation of science,” said Richard Besser, a former acting CDC director and now president of the Robert Wood Johnson Foundation.

Former CDC staffers, a number of whom exchange worried emails bemoaning the state of the agency, are deeply alarmed but wary of speaking out. One former official said current staff are in a quandary over what to do. “Even if you got a dozen of them to resign at the same time, it’s a one-day story,” said the former official.

Others were willing to speak publicly.

“I think [Redfield]’s not showing the kind of leadership in defense of the institution and in defense of science that I would hope to see,” said Mark Rosenberg, who was the first director of CDC’s National Center for Injury Prevention and Control.

“A reputation that takes 75 years to build can be destroyed in four months. That’s horrifying,” said Rosenberg, who is now retired but remains in touch with former colleagues.

Public health experts at the CDC who led the country’s responses to countless threats over decades — the deadly emergence of HIV, the anthrax attacks of the autumn of 2001, SARS, the H1N1 flu pandemic, and Ebola — have been sidelined and silenced by the administration in the midst of President Trump’s reelection campaign.

On multiple occasions, guidance documents written by CDC staff — recommendations that are meant to be the most up-to-date distillation of the emerging science on the SARS-CoV-2 virus — have been revised by political appointees in Washington to reflect administration goals.

Guidance to help churches safely resume in-person services in May originally recommended that the use of choirs be suspended or at least decreased due to evidence that choirs had been associated with a number of super-spreading events, including one in Washington state. That advice, however, was removed, according to the Washington Post, which cited objections from Vice President Mike Pence’s office.

Over the summer, according to multiple reports, officials in Washington also intervened to alter guidance on whether or not to reopen schools. That guidance was changed to suggest the CDC felt opening schools was of paramount importance, regardless of whether doing so would spread Covid-19.

“They worked on the school guidelines for months,” Rosenberg said of the CDC staff. “Around the clock, 24/7, they were working to get the best scientific guidance for the country. And then … the White House stuck an introduction on the front of it on the CDC website that said: ‘The most important thing is for kids to go back to school.’ That wasn’t written by CDC. That wasn’t anything CDC people wanted to say.”

Most recently, guidance on who to test for Covid-19 was changed to recommend against the testing of people who had been in contact with cases but were asymptomatic. In fact, finding people as soon as possible so they can be told to isolate is key to containing spread of the virus. “This is a fundamental misunderstanding of what public health is,” Frieden said.

The testing advice change led to the extraordinary publication of an op-ed in the New York Times late last month urging public health officials around the country to “Ignore the CDC.” It was written by Harold Varmus, a former director of the National Institutes of Health, and Rajiv Shah, president of the Rockefeller Foundation.

In recent days, first Politico and then other news organizations have reported that officials in Washington have been attempting to revise or delay the publication of scientific reports in the CDC’s online journal Morbidity and Mortality Weekly Report. MMWR, as it is better known, is a bedrock of public health. It is where the first reports of AIDS cases in the United States were published; it is where public health workers seeking the latest on an outbreak or a disease first turn.

Michael Caputo, director of communications for the Department of Health and Human Services and his scientific adviser, Paul Alexander, a sometimes part-time university lecturer from McMaster University in Canada, had reportedly been demanding to read and change MMWR articles before they were published. Caputo has denied having read MMWR articles before publication.

The CDC declined to make Redfield available for an interview but invited written questions for this story.

In a written response, the CDC director sidestepped all of STAT’s questions — about political influence on guidance documents, revisions of MMWR articles, and his own pledge to safeguard the agency’s reputation. Instead, he said he believes the CDC “remains the world’s premiere public health agency.”

“I believe, without question, that CDC science, data, and service have had a tremendous impact on saving human life” in the pandemic, Redfield wrote.

Redfield, a deeply religious man — he often ends an interview by saying “God bless” — is described by many as earnest and kind. Caputo called the director “one of my closest friends in Washington” in a statement issued to the New York Times.

But sources tell STAT that Redfield is not a good listener. This is a shortcoming he seems aware of; in his March 2018 address to CDC staff, he said his wife, Joy, had given him a to-do list for his new job: “The first one was ‘Listen.’ The second one was, ‘Don’t interrupt.’ The third one was ‘Listen.’”

Redfield did not come to the CDC with a background in public health. And he struggles as a communicator, eroding his ability to advocate for the CDC’s positions, a number of sources suggested. At meetings of the White House coronavirus task force, he is said to frequently defer to the more assertive Anthony Fauci, director of the National Institute of Allergy and Infectious Diseases. Though he has stepped into the breach left by the CDC director, Fauci is not a trained public health expert either. Like Redfield, he is a virologist and an HIV clinician.

Besser acknowledged he doesn’t know if or how hard Redfield fights for the CDC behind closed doors; Frieden noted it has been reported the CDC director pushed back on the issue of the MMWR.

But Redfield’s lack of a public defense of the agency he was so eager to lead is deeply concerning to CDC staff and alumni.

“The CDC director — and this goes for anyone in leadership — has to look inside themselves and say: ‘There is a line that I will not cross. And there’s a line that I will not allow others to cross, if it undercuts the value of the agency,’” Besser said. “And time and time again in this pandemic we’ve seen political actions that have undermined the credibility of the CDC, undermined the trust of the public in the CDC. And we have not been seeing a forceful defense of that by the CDC director.”

“What we’re seeing now is an erosion of that trust,” he said. “That’s detrimental and will cost lives.”

[ad_1] Sometimes this can make people look older, she claims, as rounder faces with …