As California and the nation begin rolling out coronavirus vaccines, anti-vaccine campaigners are aligning with small-business owners and far-right groups, an effort that some experts fear could supercharge mistrust of government at a crucial moment for public health.

In California, the movement toward businesses is being led by a group calling itself Freedom Angels 2.0. Originally founded by three women in response to a 2019 state bill tightening vaccine requirements for attendance in schools, the organization was best known for its protests at the state Capitol against that measure and other vaccine legislation, often filling hallways and disrupting hearings with children in tow.

But as the coronavirus has spread, so has its message — encompassing a more mainstream, values-driven ideology that centers on government overreach. That broader approach has helped the organization interest a new audience in the business community, along with others worried about schools, the economy and the social toll of isolation for seniors.

“There is this strategic mission creep into other groups that might feel disaffected,” said Richard Carpiano, a professor of public policy and sociology at UC Riverside, who has followed the anti-vaccine movement.

At the same time, extremist experts have warned that militant groups who have been protesting election results and lockdowns across the country have also turned their attention to the anti-vaccine movement, where they see a cause that could unite followers after a presidential transition.

Eric Ward, senior fellow at the Southern Poverty Law Center, said he has tracked a deliberate “alt-right attempt to politicize the … anti-vaxxer movement,” with the pandemic providing “fertile ground for that organizing because folks are fearful right now.”

Devin Burghart, a social justice campaigner who specializes in research on white nationalism, said anti-vaccine activists appear to be adopting the language and beliefs of militia causes along with reopen rhetoric, an attempt to radicalize existing anti-vaccine networks, including mothers concerned about their children’s health.

“What started as essentially wine moms and health-conscious yoga types has become in short order the militant wing of the COVID-19 insurrection,” said Burghart, executive director of the Institute for Research and Education on Human Rights. “They have been inundated with this larger far-right base of activism that has inexorably altered their trajectory.”

Burghart said he has tracked crossover between chapters of the Freedom Angels in other states and groups including People’s Rights, founded by antigovernment activist Ammon Bundy, which has suggested the need for violent noncompliance with coronavirus public health measures. In California, Freedom Angels members have posted pictures online holding guns, and its founders have offered firearm safety training and advice on circumventing lockdown orders. 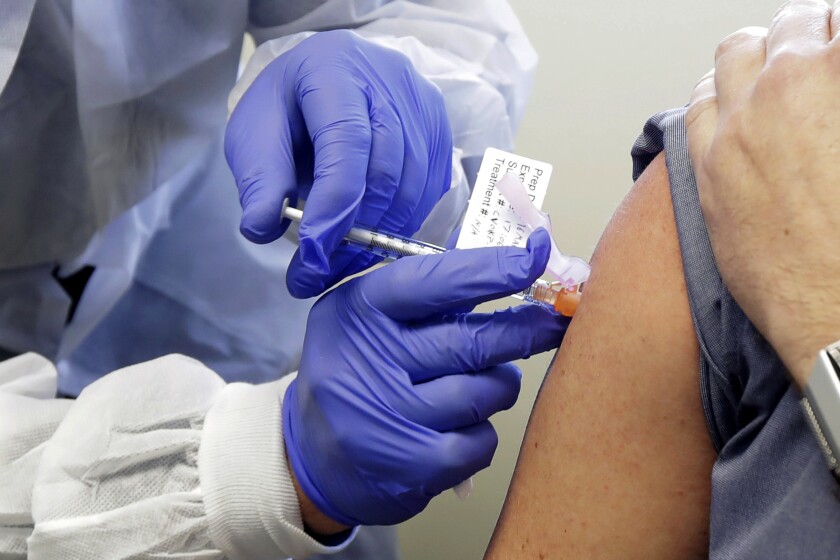 A Food and Drug Administration analysis finds Moderna’s COVID-19 vaccine to be safe and effective, making its authorization for emergency use likely.

As the different factions have come together online and at protests, Carpiano and others said, they are potentially “cross-pollinating” ideologies and spreading unfounded conspiracies and inaccurate information, especially to audiences that have not previously taken part and who may not fully understand the far-right alliances.

“It is more concerning now to see how they have been legitimized more by expanding into these new areas and getting these new allies,” Carpiano said.

Ward said the Freedom Angels have only recently come on his radar but that their influence has grown quickly.

“They’re an organization that has sought to resist state efforts to mandate vaccinations and their recent activity has really kind of ground them as an essential leadership group across the United States,” he said.

When coronavirus lockdowns first were announced in spring, anti-vaccine groups, including the Freedom Angels, were quick to join with anti-lockdown protesters, finding common ground in suspicion of government motives, and the idea that personal freedoms were at risk because of the public health rules. Colorado, Florida, Texas and Wisconsin are a few of the states that have seen the “odd bedfellows” as of anti-vaccine groups with those angered by public health measures to combat the virus, as Carpiano describes it.

‘I don’t believe it’: Huntington Beach a symbol of mask resistance as doubters abound 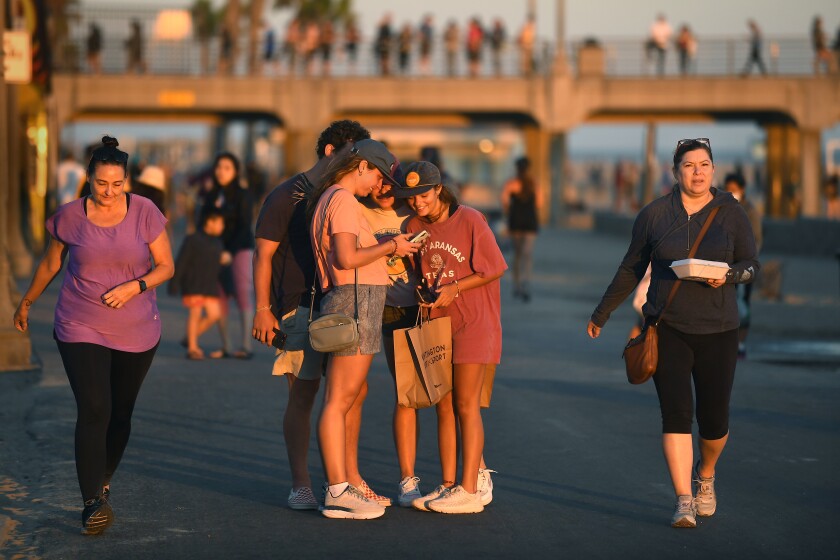 ‘I don’t believe it’: Huntington Beach a symbol of mask resistance as doubters abound

As infection rates soar in Orange County, residents of Surf City doubt the severity of the pandemic and call for easing restrictions.

In California, rallies at the Capitol in Sacramento organized by the Freedom Angels at times drew thousands of supporters from across a spectrum of discontent, ranging from church leaders to tea party types to Blue Lives Matter advocates unhappy with protests over police shootings.

The Capitol rallies also drew alt-right groups including the Proud Boys, which, along with pro-Trump protesters who continue to falsely dispute the election of Biden as president, have been involved in multiple violent clashes with antifascist groups in recent weeks in Sacramento.

Ward, an expert in extremist groups, predicts that those forces will remain allied under the new presidential administration, coalescing around mistrust of COVID-19 vaccinations. Burghart predicts economic discontent and anger at lockdown measures will also persist as binding forces.

The growing popularity of those grievances can be seen in places such as the San Joaquin Valley, hit hard by both the coronavirus and the economic shutdown. As the latest round of lockdowns has closed restaurants and services such as salons, the Freedom Angels have again pivoted, turning their attention to local communities and to the idea of “sanctuary cities” for businesses, exempt from lockdown rules.

The push to advocate for mom-and-pop entrepreneurs in dire financial straits has upped the group’s profile and earned it trust from desperate entrepreneurs who have never heard of its vaccine efforts, as it targets city councils and supervisorial boards on behalf of beleaguered businesses.

Their message of government going too far especially resonates in California’s largely conservative inland and Northern areas. Shutdown orders have temporarily shuttered thousands of small businesses and many owners say they are on the brink of closing permanently without financial aid or the ability to serve customers. At the same time, the closure orders seem arbitrary to some — leaving many big-box stores able to operate while small businesses face more restrictive measures.

Stockton restaurant owner Johnny Hernandez and his partner and fiancee Rocio Arevalo, a nurse, are small-business owners who have joined a Freedom Angels effort in that city, though they had never heard of the group previously and were unaware of its background.

Hernandez and Arevalo have tried to work under state restrictions to keep their gastropub going, but are almost out of money and solutions, they said. They did not qualify for federal loans because they have only been open two years, and lost money the first year — knocking them out of eligibility, Arevalo said. Now, they are desperate to be allowed to operate, even if only with outdoor dining, to keep their venture alive.

“It’s news to me who they are,” Hernandez said at a recent rally on the steps of Stockton’s City Hall.

“Not once has anyone spoken about [vaccines],” Arevalo added.

Neither was concerned about the affiliation. 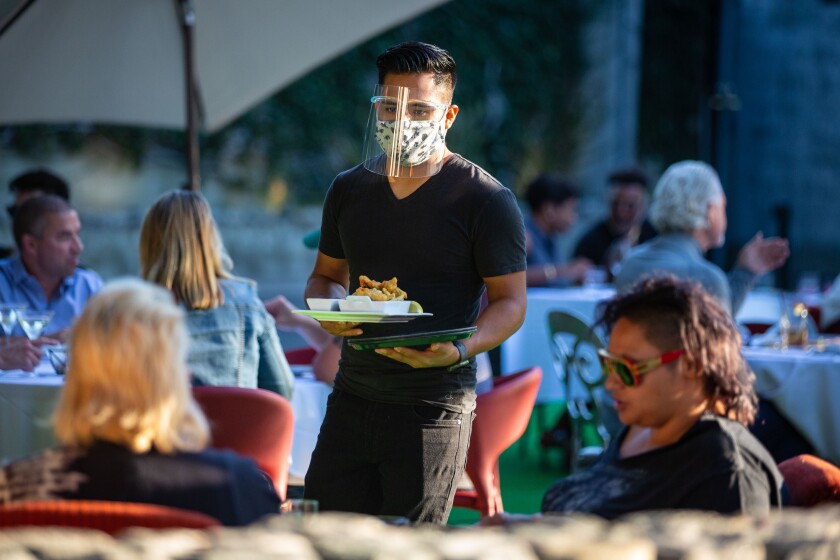 Chefs and restaurateurs react to another shutdown of in-person dining amid L.A. County’s coronavirus surge. “We’re holding on for dear life,” one chef said. “There’s no aid in sight, nothing at all.”

Here are the latest COVID rules for the county

In a recent interview with The Times, Tara Thornton, a co-founder of Freedom Angels Foundation — the original group that protested vaccine legislation but that has since splintered — said she is not surprised that her new organization has found allies in the business community. She says entrepreneurs feel unheard by government and are out of options.

“They are pushed against the wall where there is no one else to go to,” said Thornton, who lives in Northern California.

Co-founder Denise Aguilar, who lives in Stockton, said that the issue of small businesses closing isn’t a reach for her group, because she views lockdown rules, like vaccine requirements, as unwarranted government intrusion.

“This is the same issue,” she said. “It’s always the same thing. It’s overreach.”

But the group has not abandoned its vaccine opposition.

“You are getting the libertarianism with a whole bunch of pseudo-science and conspiracy theories,” Carpiano said.

In a recent interview with The Times, Thornton contended that PCR tests, used to diagnose COVID-19, are inaccurate and “not capable” of detecting the infection. She and other members of the Freedom Angels have also spoken publicly and on social media repeating larger debunked medical theories, including that the virus is no worse than the flu. They have stormed local government meetings without masks.

Both Thornton and Aguilar said they were opposed to COVID-19 vaccines, and expected their group to speak out against them in coming months, and predicted more widespread support for their views as more vaccines rolled out amid restrictions.

“You can see that is something coming from a mile away,” Aguilar said.

Richard Pan (D-Sacramento), the only doctor in the state Senate who has also been targeted for harassment by the Freedom Angels and other anti-vaccine groups, said he believes the anti-vaccine contingent remains a “loud minority,” but concedes it could have an oversized effect.

“They have been able to seed enough people that they can endanger everyone else,” Pan said. “They are just large enough to ruin it for all of us, and that is the big problem.”