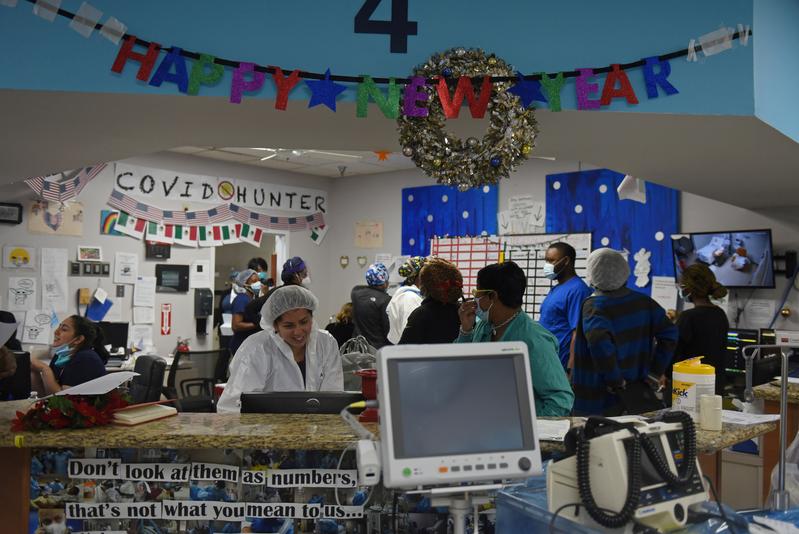 HOUSTON (Reuters) – Shortly after midnight Duc Nguyen sat up in his hospital bed for a video call with his wife. The glow of a television and a street lamp outside his window provided the only light as a nasal cannula delivered oxygen to his lungs.

It was not how the 33-year-old had envisioned welcoming in the new year, but he said he was grateful the United Memorial Medical Center (UMMC) in Houston had a vacant bed so he could be treated for pneumonia brought on by COVID-19.

Nguyen said he was confident he would recover, but he predicted the worst days of the pandemic were ahead.

“We are still in for another treat next year,” he said in a raspy voice. “It’s not over yet.”

Similar scenes were playing out across the country as a post-Thanksgiving surge of infections added to the number of patients forced to usher in 2021 alone, confined to a hospital room by a virus that has taken more than 342,000 American lives.

Located in a working-class area of north Houston, UMMC has been hit hard by the waves of cases that slammed into Texas during the summer and fall, exacting an immense physical and emotional toll on nurses such as Tanna Ingraham, who has herself overcome two bouts of COVID-19.

In normal times Ingraham might have rung in the new year sharing drinks with friends. Instead, she was still coming to terms with the sudden death this week of a patient who had just been taken off a ventilator amid signs she was on the mend.

Like her, the patient was 43, and Ingraham choked back tears as she drew the tubes from her body and placed her into a body bag – a task she has grown used to this year. For Ingraham, 2021 and widespread vaccination cannot come soon enough.

“I’m just hoping that at the end of this there is going to be a light because, honestly, that’s the only thing that keeps me going. That and my faith,” she said. “So, 2021 I’m ready.”

This week Reuters followed doctors and nurses as they made their rounds of UMMC’s COVID-19 unit, pausing to check on vital signs and sometimes offering a hug or gripping a hand. Touch, Ingraham said she had learned from her own battles with the disease, is critical to warding off a sense of despair.

A handmade sign marks the number of days — 287 — that staff have been working since the pandemic came to Texas in the spring. Mexican and American flags hang on the walls, a nod to the many medical students from Mexico who have come to help and learn. A Christmas tree and holiday decorations offset an otherwise tense atmosphere amid worries of a coming surge.

On Thursday Texas set a new record for COVID-19 hospitalizations, with 12,268 patients in hospitals across the state, climbing further above a previous peak in July, according to data from the Texas Department of Health. A University of Washington team whose model has been used by the White House projects the state’s hospitalizations will peak on Jan. 9.

Dr. David Persse, the health authority for the Houston Health Department, worries that infections will accelerate in January and February as cases stemming from Christmas and New Year celebrations materialize. Another concern is the possible spread of a highly infectious coronavirus variant discovered in Britain, he said.

“It’s a huge concern,” Persse said. “We are all sort of bracing to see if that occurs.”

“We have patients up to the wazoo. The wards are full. My nurses are exhausted. Emotions are everywhere. People are dying,” said Varon, who garnered national attention in November after a photo of him hugging a COVID-19 patient went viral.

“My hope for 2021 is that people are a little more conscientious,” he said, referring to mask-wearing and social distancing. “That they understand by wearing your mask you are protecting somebody else.”

Terry Peden, a 57-year-old electrical engineer, came to Varon’s COVID-19 unit after being told by another hospital he should stay at home and ride out his sickness, which progressed from a COVID-19 diagnosis to double pneumonia.

Peden said he was just happy to be alive and was content to ring in the New Year with a call to his son and daughter from his hospital bed.

“I would love to be home, but everybody else would too,” Peden said. “I’ll be glad when 2020 is gone. It has been one heck of a year for the whole world.”