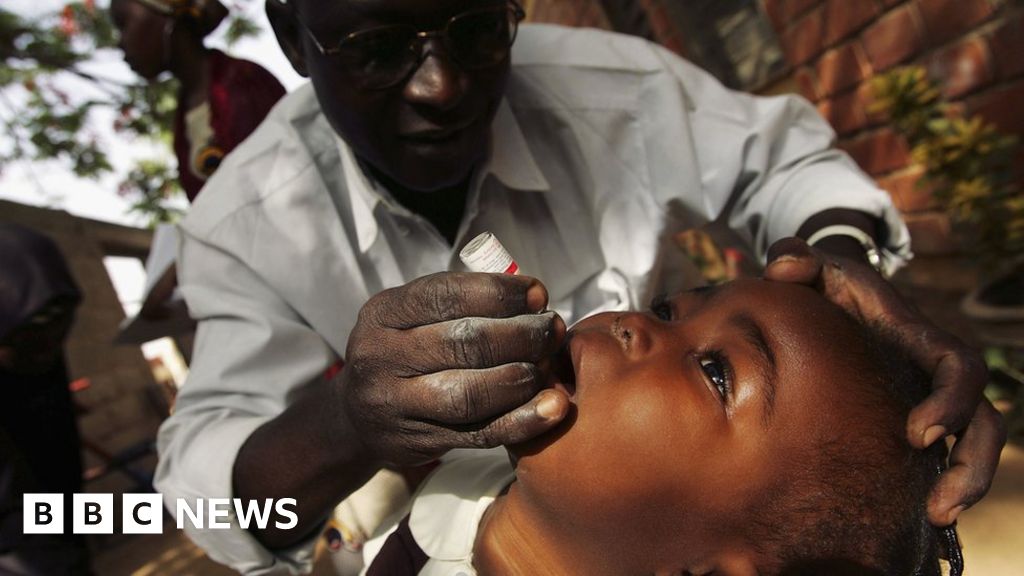 Africa is to be declared free from wild polio by the independent body, the Africa Regional Certification Commission.

Twenty-five years ago thousands of children in Africa were paralysed by the virus.

The disease is now only found in Afghanistan and Pakistan.

There is no cure but the polio vaccine protects children for life.

Nigeria is the last African country to be declared free from wild polio, having accounted for more than half of all global cases less than a decade ago.

The vaccination campaign in Nigeria involved a huge effort to reach remote and dangerous places under threat from militant violence and some health workers were killed in the process.

What is polio and has it now been eradicated in Africa?

Polio is a virus which spreads from person to person, usually through contaminated water. It can lead to paralysis by attacking the nervous system.

Two out of three strains of wild polio virus have been eradicated worldwide. On Tuesday, Africa is to be declared free of the last remaining strain of wild poliovirus.

More than 95% of Africa’s population has now been immunised. This was one of the conditions that the Africa Regional Certification Commission set before declaring the continent free from wild polio.

Now only the vaccine-derived polio virus remains in Africa with 177 cases being identified this year.

This is a rare form of the virus that mutates from the oral polio vaccine and can then spread to under-immunised communities.

The World Health Organization (WHO) has identified a number of these cases in Nigeria, the Democratic Republic of the Congo, Central African Republic and Angola.

How did Africa eliminate wild polio?

Without a cure a vaccine developed in 1952 by Dr Jonas Salk gave hope that children could be protected from the disease. In 1961, Albert Sabin pioneered the oral polio vaccine which has been used in most national immunisation programmes around the world.

In 1996 poliovirus paralysed more than 75,000 children across the continent – every country was affected.

That year Nelson Mandela launched the “Kick Polio Out of Africa” programme, mobilising millions of health workers who went village-to-village to hand-deliver vaccines.

It was backed by a coalition of groups including Rotary International which had spearheaded the polio vaccination drive from the 1980s.

Since 1996 billions of oral polio vaccines have been provided, averting an estimated 1.8 million cases of wild poliovirus.

What have the challenges been?

The last communities at risk of polio live in some of the most complicated places to deliver immunisation campaigns.

Nigeria is the last country in Africa to have reported a case of wild polio – in Borno state in Nigeria’s remote north-east, and the epicentre of the Boko Haram insurrection, in 2016.

At the time it was a frustrating set-back as the country had made huge progress and had gone two years without any cases being identified.

Outside Nigeria, the last place to have seen a case of polio was in the Puntland region of Somalia in 2014.

Conflict with the Islamist militant group Boko Haram has made parts of Nigeria particularly difficult to reach, Borno state in particular.

More than two million people have been displaced by the fighting. Frontline workers, 95% of whom were women, managed to navigate areas of conflict like Lake Chad by boat and deliver vaccines to remote communities.

Widespread rumours and misinformation about the vaccine have also slowed down immunisation efforts.

In 2003, Kano and a number of other northern states suspended immunisations following reports by Muslim religious leaders that the vaccine was contaminated with an anti-fertility agent as part of an American plot to make Muslim women infertile. Laboratory tests by Nigerian scientists dismissed the accusations.

Vaccine campaigns resumed the following year, but the rumours persisted. In 2013 nine female polio vaccinators were killed in two shootings thought to be carried out by Boko Haram at health centres in Kano.

It has taken decades to achieve eradication and overcome suspicion around the vaccine.

How polio survivors made a difference

Winning the trust of communities has been key.

Misbahu Lawan Didi, president of the Nigerian Polio Survivors Association, says that the role of survivors has been crucial in persuading people to accept the campaign.

“Many rejected the polio vaccine, but they see how much we struggle to reach them, sometimes crawling large distances, to speak to them. We ask them: ‘Don’t you think it is important for you to protect you child not to be like us?'”

From polio survivors, to traditional and religious leaders, school teachers, parents, volunteers and health workers, a huge coalition developed to defeat polio. Working together they travelled to remote communities to immunise children.

How serious is polio?

Initial symptoms include fever, fatigue, headache, vomiting, stiffness of the neck and pains in the limbs. It also invades the nervous system and can cause total paralysis in a matter of hours.

One in 200 infections leads to irreversible paralysis. Among those paralysed, 5% to 10% of people die when their breathing muscles become immobilised.

Polio can be easily imported into a country that is polio free and from there it can spread rapidly among under-immunised populations.

This happened in Angola, which despite decades of civil war, defeated polio in 2001.

The country remained free from polio for four years until 2005 when a number of cases were thought to have been brought in from outside the country.

The WHO says that it is important countries remain vigilant and avoid complacency until there is global eradication.

If they let down their defence by failing to vaccinate, then wild polio could once again begin to spread quickly.

For all types of polio to be eliminated, including vaccine-derived polio, vaccination efforts will need to continue alongside surveillance, to protect children from being paralysed by the disease in the future.