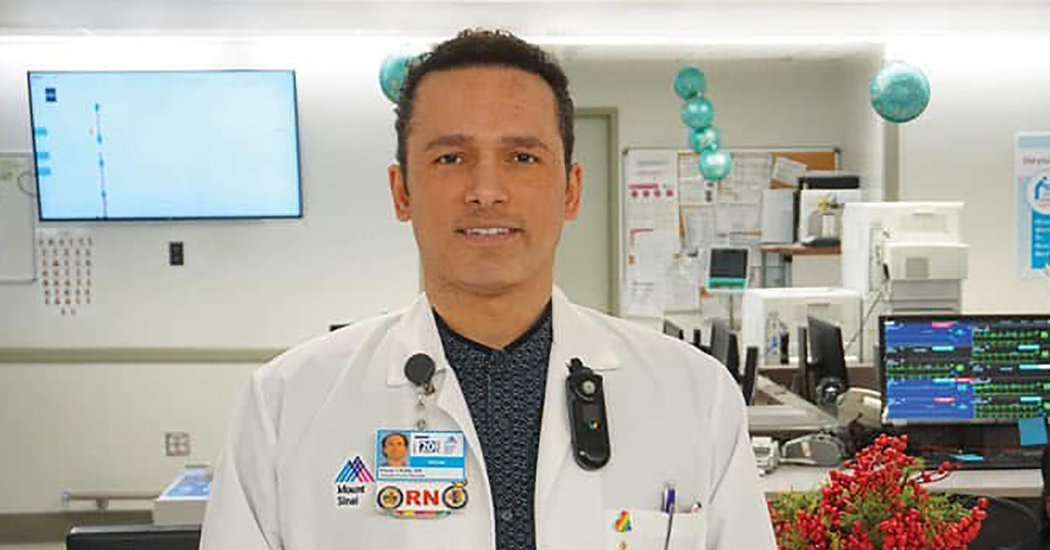 Kious Kelly, a nurse manager at a Manhattan hospital, texted his sister on March 18 with some devastating news: He had tested positive for the coronavirus and was on a ventilator in the intensive care unit. He told her he could text but not talk.

That was his last message. Ms. Sherron’s subsequent texts to him went unanswered. In less than a week, he was dead.

Mr. Kelly, a 48-year-old assistant nurse manager at Mount Sinai West, may have been the first New York City nurse to die from the virus.

His sister said he had asthma but was otherwise well.

“His death could have been prevented,” Ms. Sherron said on Facebook Wednesday. Later, she added: “I’m angry. He was healthy.”

Colleagues at the hospital were angry, too. Some complained on social media channels that they did not have an adequate supply of protective clothing or masks.

A nurse who worked with Mr. Kelly said the hospital had offered nurses one plastic protective gown for an entire shift, though normal protocol required a change of gowns between interactions with infected patients. The nurse, who spoke on condition of anonymity because the staff member was not authorized to speak to the media, said Mr. Kelly had not used protective equipment, even though he regularly helped nurses on his team with hands-on care.

As recently as March 10, he helped a nurse take off her protective gear after working with a patient who tested positive for the virus, the nurse said.

Several Mount Sinai West staff members, contacted for this story, said they had been told by hospital administrators not to speak to journalists. Mr. Kelly’s death was first reported in The New York Post.

Gia Lisa Krahne, an outside consultant who provided alternative Ayurvedic care to a patient at Mount Sinai West, said she last saw Mr. Kelly at work the week of March 9, interacting with patients and hospital staff, wearing neither a mask nor any protective gear.

Bevon Bloise, a registered nurse at Mount Sinai West, complained on Facebook that the hospital does not have sufficient personal protective equipment, or P.P.E. “I’m also very angry with the Mount Sinai Health System for not protecting him. We do not have enough PPE, we do not have the correct PPE, and we do not have the appropriate staffing to handle this pandemic. And I do not appreciate representatives of this health system saying otherwise on the news.”

“We lost a great fighter during this war,” a co-worker named Diana Torres said on Facebook. She posted a photo of co-workers tying bandannas over their faces in an effort to protect themselves. “NO THIS IS NOT PROPER PPE,” she wrote.

On its Facebook page, Mount Sinai West said it was “deeply saddened by the passing of a beloved member of our nursing staff,” without naming Mr. Kelly.

In an email, a hospital spokeswoman, Lucia Lee, disputed the claim that the hospital had not furnished protective equipment to its staff. “This crisis is straining the resources of all New York area hospitals, and while we do — and have had — enough protective equipment for our staff, we will all need more in the weeks ahead,” Ms. Lee said in the statement.

The New York Post article included a photo of hospital staff wearing garbage bags over what appeared to be scrubs. Two nurses, who spoke on condition of anonymity for fear of being fired, said they were disposable scrubs made of permeable material, which is why nurses wrapped plastic garbage bags around them.

The photo, they said, was taken on March 17, at a time when there were many coronavirus patients at the hospital and others who had yet to be tested but who presented symptoms of infection.

In the emailed statement, Ms. Lee added that “the troubling photo circulating in the media specifically shows the nurses in proper P.P.E. underneath garbage bags.”

She did not respond to a question asking why hospital staff wore garbage bags.

Mr. Kelly lived a few blocks away from the hospital and was described by colleagues as a dedicated, good-humored colleague.

“He used to carry around a thick notepad holder that hides a box full of chocolates and candies so he can have it handy to give out to miserable/ grumbly nurses and doctors who are more likely than not ‘hangry,’” Joanne Loo, a nurse at Mount Sinai West, posted on Facebook on Wednesday.

But nursing was not his first vocation. A native of Lansing, Michigan, Mr. Kelly moved to New York more than 20 years ago to pursue a career as a dancer, his sister said. He then went to nursing school and worked as a nurse at Mount Sinai West, before being promoted to the post of assistant manager in the telemetry department.

His family is now trying to bring his body back to Michigan.