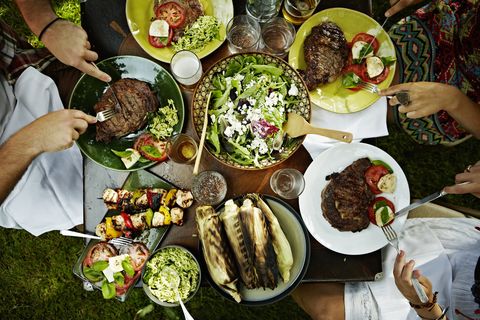 Committing to a healthier diet is one thing, but man can only stand so much raw kale and undressed tofu before he starts demanding some flavor. True, we live in the golden age of recipe-sharing. But who can be bothered to scroll through a drugstore-receipt-length saga about some home-cook’s husband’s lactose intolerance—just to find a healthy-ish meal idea that’s two hours and 12 ingredients too complicated? Somebody, maybe, but not you. Rather than struggle through overhauling your diet, you could just start making a few simple, everyday swaps that’ll help you eat more mindfully, without sacrificing taste. Here are five of them.

Get out of the frying pan and into the air fryer

There’s no denying the magic of a fried buffalo wing, but there’s also no denying the health consequences of treating every day like it’s Sunday when it comes to inhaling breaded, deep fried meats. Enter the air fryer, which works sort of like a convection oven to cook food with superheated air instead of boiling oil. More importantly, it takes a bunch of the work out of cooking.

Some experts suggest swapping traditionally fried foods for air-fried can cut your calorie intake by up to 80 percent. Note: That math won’t be on your side if you swap all the foods you eat for air-fried ones. But it’s a good starting point for making chicken cutlet night a little healthier. Air fryers also cook faster than lard or oil does, so the hot-right-now method also gives you more time to savor the flavor.

In the Venn diagram of “healthy” and “tasty,” there aren’t many beers that land in the middle. Deschutes Brewery, which hails from the craft-beer haven of Oregon, has managed to stick the landing on this trick, with low-calorie brews that are more than just fizzy, vaguely hoppy water. Their signature Wowza! hazy pale ale is packed with citrus flavor yet infinitely crushable, with just 100 calories and 4g of carbs. The light and crispy Da Shootz! is a summer pilsner that’ll quench your thirst all year round. For something hoppier, their gluten-reduced Lil’ Squeezy Juicy Ale is a lighter alternative to the typically calorie-heavy IPA, at 145 calories per 12 ounces. All three make great replacements for the same old high-cal lagers. And yeah, the names are just really fun to say.

Give light ice cream a (s)whirl

They say you can’t have your cake and eat it, but nobody mentioned ice cream. Maybe that’s because the frozen-treat landscape is ever expanding with improved, better-for-you recipes with more nutritious, novel ingredients. Now, when your streaming service asks you if you’re still watching, at least the pint in your hand can be a more virtuous option—whether lower calorie, familiar, or not even milk-based.

What’s more, you might be doing your health a favor by sprinkling in dessert. A study published by the Journal of Consumer Psychology argues that goals that require “extended inhibition of desires, such as weight loss and financial saving, can benefit from including planned hedonic deviations in the goal-striving plan.” So as long as those moments of hedonism don’t involve chain-smoking or competitive hot-dog eating, giving yourself planned cheat days can actually help you get healthier.

Recent research suggests that cooking at home is a smart way to cut down on excess fat, unhealthy additives, and harmful chemicals in your food. But did those researchers have the week you just had? When you just can’t be bothered to cook, by all means, eat out. Just remember to dine out smartly.

This is easier to do today than ever, with so many restauranteurs taking a mindful approach to diners’ dietary restrictions and health priorities. Which is to say, go ahead and customize your meal within reason (without worrying about what your co-diners or your server thinks; it’s 2020, it’s cool). Get rid of unnecessary add-ons like extra cheese or sour cream. Given the option, sub white rice for the healthier side or base du jour.

“When ordering a salad, pay attention to the nutrition content of the dressing,” says registered dietician Ayla Gentiletti. Just two tablespoons of certain creamy dressings can add as much as 300 extra calories to your salad, she notes. “When in doubt, choose a vinaigrette or cut your dressing use by adding fresh lemon or lime juice,” Gentiletti says.

When in doubt, zoodle it

Or sweet potato-spiral it, or rice up your favorite vegetable. We’ve reached peak veggie swap: Zucchini got in early for being crazy low in calories and carbs, in addition to being packed with potassium, fiber, and vitamins A and C. But when you’re craving a big bowl of your favorite carbonara or Mom’s Sunday gravy, you can also swap starchy pastas for prepackaged sweet potato noodles or riced cauliflower or broccoli, which deliver plenty of fiber, iron, and vitamins while remaining a fun-to-eat delivery system for sauce, protein, and flavor. Pour some turkey meatballs with teriyaki sauce over some riced veggies and you’ll be jet-skiing off to flavor country in no time.