Three children in Israel are believed to have been affected by a Kawasaki-like disease thought linked to COVID-19, Channel 12 news reported on Saturday. All three recovered and have since been released from the hospital, according to the report.

The children were from the northern part of the country and from Jerusalem, the report went on without offering further details.

The Health Ministry hasn’t published official figures for the number of children who have suffered from the syndrome.

Over the past three weeks, several countries have reported cases of children affected by an inflammatory disease with symptoms similar to those of a rare condition, Kawasaki’s disease. Scientists believe it may be linked to COVID-19. 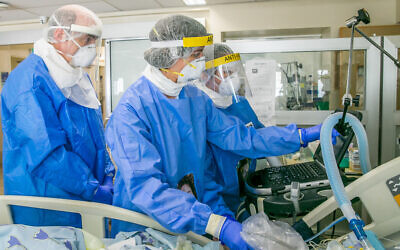 Medical workers at Ichilov Hospital in Tel Aviv treat a patient in the coronavirus unit on May 4, 2020. (Yossi Aloni/Flash90)

Symptoms include a high fever, rashes, abdominal pain, conjunctivitis and a red or swollen tongue. The majority of children recover from the disease.

The World Health Organization said Friday that it is studying the condition, which it described as having “some features similar to Kawasaki’s disease and toxic shock syndrome.”

A nine-year-old boy died in France from the disease believed connected to the virus, his doctor said on Friday, the first such death in the country as similar child fatalities are being investigated in New York and London.

A London children’s hospital said on Wednesday that a 14-year-old boy with no underlying health conditions had died from the disease and had tested positive for the new coronavirus.

In New York, Governor Andrew Cuomo said on Tuesday that three children in the state had died and more than 100 cases were being investigated.

The report came as Israel’s education system was set to return to full operation on Sunday in most of the country after some two months during which Israeli children were ordered to stay home in order to contain the spread of the coronavirus.

The plan approved Thursday returns all students to daycares, kindergartens and schools full-time, except for areas that have been centers of outbreaks in the last two months, some of which have been under lockdown. 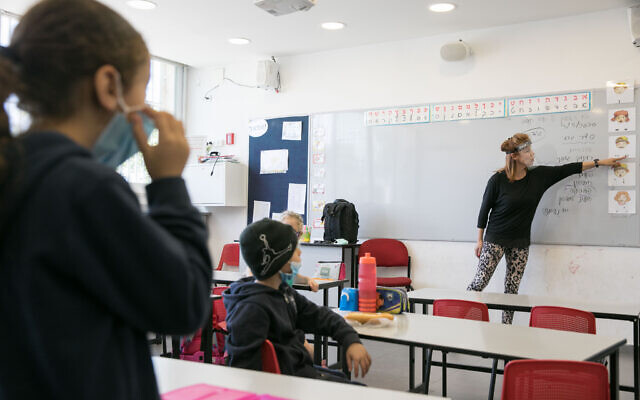 Illustrative: Israeli students wear protective face masks as they return to school for the first time since the outbreak of the coronavirus on May 3, 2020 in Jerusalem. (Olivier Fitoussi/Flash90)

Those areas are predominantly, but not exclusively, ultra-Orthodox cities, communities and neighborhoods.

Schools will enforce hygiene rules such as washing hands, and every pupil will have to present a document saying they are healthy upon arrival at school.

All pupils will be required to wear face masks during recess in open areas, and those in grades 4-12 will also wear them in class.

They will also have to keep a two-meter distance from one another during lunch breaks, while schools and kindergartens are required to hold most of their activities in places that allow for the mandatory distance to be maintained.

Students will go for breaks between classes in smaller groups, not all at the same time.

The number of confirmed coronavirus cases in Israel increased by 17 in the last 24 hours, Health Ministry data showed Saturday morning, following more than a week of under 50 daily infections.

One new death was recorded since Friday morning, bringing the nation’s toll to 267.

Of those ill with the virus, 59 were in serious condition, 49 of them on ventilators. Another 41 were in moderate condition with the rest displaying mild symptoms, the ministry said.

Amid the sustained drop in infections, the government has increasingly rolled back restrictions meant to curb the outbreak. More such measures are reportedly in the works.